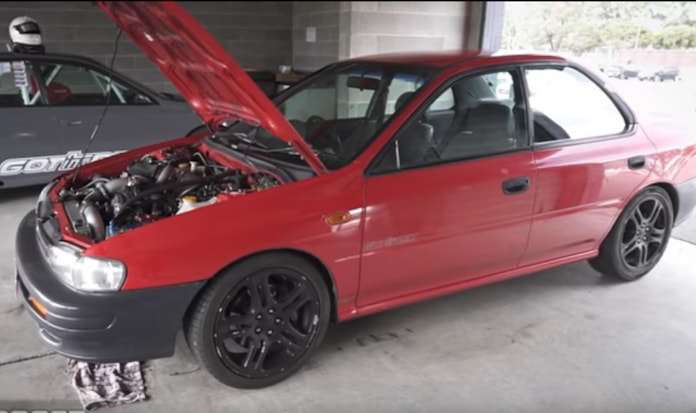 The guys at GotitRex know how to tune a Subaru Impreza EJ boxer engine, How about revving to 12,000 rpm?
Advertisement

A leading Subaru performance shop in Melbourne, Australia, GotitRex takes a 1994 Subaru Impreza and turns it into an insane 12,000 rpm track power. It’s what the Aussie Subaru specialists does to WRX STI and Impreza WRX engines. This happens to be an EJ boxer they de-stroked to hit north of 10,000 rpms.

The highly-modified flat-four boxer sounds incredible revving on the dyno and out on the track. Copyright issues wouldn’t allow us to upload the video by Fullboost, but you can see it with the link here.

GotitRex took the 1994 Subaru Impreza LX called “Betty” and modified the EJ boxer with a Garrett GTW3884 turbo that peaks at around 40psi and holds a flat power curve from 6000rpm onwards. It’s mated to stock 5-speed manual gearbox that will likely need to be replaced.

The high-revving Impreza boxer engine with the 5-speed will hit 140 mph in 3rd gear alone. Fullboost says, “With a kerb weight of around just 1100kg, the car essentially feels like your inside a 4-door motorbike.”

The guys at GotitRex have run Betty on the track, it’s street-legal and has around 80 power runs on the dyno. The Subaru EJ engine is pumping out 600 whp, uses a Link G4 EFI, and runs on E85 fuel. They say the engine is holding up after everything they’ve thrown at it.

The video says the point of building the 1994 Subaru Impreza called Betty, was to think outside the box, “bring theory into practice and try something different on a flat four boxer engine.” They have a street sleeper that shows what the Subaru boxer engine is capable of.

What do our readers think of this sick boxer engine? If you think this article would interest your friends, consider sharing or tweeting it to your followers.