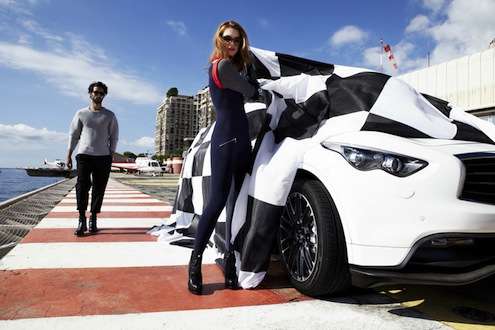 The Infiniti FX Vettel Edition is an exclusive high-performance production car inspired by and developed in conjunction with, the reigning Formula One World Champion Sebastian Vettel.
Advertisement

If the reigning Formula One World Champion Sebastian Vettel were to design a car, what would it be? It would be exclusive, fast and expensive to be sure. Infiniti has partnered with the F1 Red Bull Racing’s double World Champion to produce the most powerful and expensive Infiniti ever made. The Infiniti FX Vettel Edition is one of the most exclusive and exceptional cars ever to reach production. Only 150 of the FX Vettel cars will be produced and they won’t come cheap. They start at $155,172 and could be more outside of Europe.

Each exclusive Infiniti FX Vettel Edition is powered by a naturally-aspirated 5.0-liter V8 engine which produces 414 horsepower and 383 lb ft of torque. The FX Vettel will sprint from 0-62 in 5.6 seconds with a top limited speed of 155 mph. The performance sports crossover is lighter and more aerodynamic than its tamer stablemate and uses the same carbon-fibre as the Infiniti-partnered Red Bull Racing Formula One cars that Sebastian Vettel drives. It only comes in one color, Moonlight White, and the carbon rear spoiler is an optional extra.

The sporty version was brought to life with the input from Vettel and his knowledge of racing and performance. He was instrumental in its development and also participated with the test-driving team. Infiniti says, “Sebastian Vettel continues to be central to the FX Vettel project by participating in the VIP hospitality for the 150 people around the world who will join him in this most exclusive of motoring clubs.” Those VIP exclusive events will include high performance driver training with star drivers, sessions in an F1 simulator, passenger rides in a three-seater F1 car, and unique test drives.

The fulfillment of Sebastian Vettel's dream

The idea came to life while Vettel and Infiniti's Senior Vice President and Chief Creative Officer, Shiro Nakamura, sketched out the basis for what would become the FX Vettel Edition. Vettel had a dream to build a high-performance sports crossover. Infiniti is partnering with CRD (Car Research & Development) in Germany to make the high-performance Vettel Edition model come to life. The first pre-production model made its debut at the Goodwood Festival of Speed in the UK in June and was driven by Vittel. Six more pilot models have been produced for testing and development work.

Each special FX Vettel Edition requires 320 man-hours to build by a team of 25 craftsmen, with all the work done by hand and the only mechanical help will come from the occasional laser. The FX Vettel Edition crossover has been extensively tested in Japan and Germany. Infiniti says engineers and the CRD development team have racked up 13,000 miles in each pre-production model, mostly on the Autobahn and some track testing.

The FX Vettel Edition production will be limited to 150 editions worldwide and none will be offered in the U.S. Fifty cars are for Western Europe, 50 for Russia and 50 for the Middle East. Production is due to start in February 2013 in Bottrop, Germany. Customer deliveries are due to begin in March 2013 with all the cars due to be completed by mid June.

Eric Burns wrote on January 21, 2015 - 6:11pm Permalink
Can you tell where or if the carbon rear spoiler can be purchased separately? I have been looking all over starting 2011...