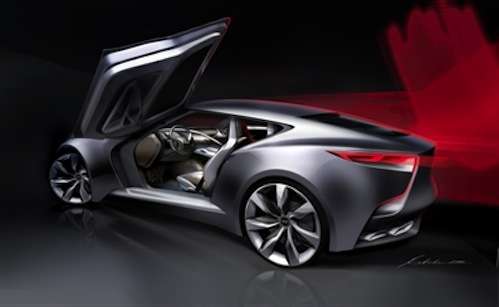 The Hyundai Concept HND-9 makes its world debut at the 2013 Seoul Motor Show. Does it reveal the companies future design direction and possibly the next-generation Genesis Coupe?
Advertisement

Hyundai is one of the fastest growing automotive brands and the new Hyundai Concept HND-9 is an indication of what the future may hold for the South Korean automaker. Hyundai has been aggressive in their challenge to the Germans and Japanese and the Concept HND-9 is the latest example of what their intentions are for the future. Hyundai has just unveiled the new luxury concept coupe for the world to see at the 2013 Seoul Motor Show this week. What does the future hold for the brand?

The new concept is a rear-drive performance sports coupe that we said last week could be a preview of the next-generation Genesis Coupe. And Suk-Geun Oh, head of Hyundai Design Center has hinted at that also. “HND-9 will give customers a glimpse of Hyundai’s future luxury sports coupe models,” he said. “Representing an evolution of Hyundai’s ‘Fluidic Sculpture’ design philosophy, the rear-wheel drive sports coupe concept balances high performance with a sophisticated image.”

Look for Hyundai to increase their luxury offerings

Hyundai has plans to increase their luxury offerings and this new Concept HND-9 that has been unveiled in Korea is the future of the brands luxury intentions. Will Hyundai be able to keep up with the Germans and Japanese? Hyundai Motor Group which includes Kia Motors, has a goal to be one of the leading global top automakers. Hyundai will likely be creating a luxury division in which to launch their new luxury sports coupe and future luxury vehicles.

Hyundai has been very open about their future luxury brand intentions, and we should expect to see big changes coming to the South Korean automaker. "Strengthening our fundamentals, especially in the area of design, is imperative to secure long-term competitiveness," said Woong-Chul Yang , Vice Chairman of Hyundai Motor Group's R&D Center in Korea. "Design is not just the most visible aspect of the car, but it's an area customers have a strong emotional connection to. It is at the center of our efforts to enhance our brand value."

Concept HND-9 is a first step

The HND-9 is the ninth concept model developed by the Hyundai Motor Group’s R&D Center in Namyang, Korea. The vehicle, with its dramatic, long hood and wheelbase, has an overall length of 4,695mm, width of 1,890mm and height of 1,340mm with a 2,860mm wheelbase. Under the long hood is a 3.3-liter turbo GDi engine and 8-speed auto transmission, HND-9 delivers a maximum output of 370 ps (362 hp). It has a striking appearance and exudes performance.

It comes with sexy twenty-two inch alloy wheels and is manufactured with carbon materials which contributes to great styling, and a lower body weight. Inside, the seats are made of a sporty and luxurious mesh, and reflect different colors depending on which angle they are seen from. The driver-oriented cockpit features a high-tech interface that offers both functionality and aesthetics.

The future is already here for Hyundai and and the Concept HND-9 luxury sports coupe is a good example of what their plans are for their luxury performance division. Look for the Hyundai Concept HND-9 to either be a preview of the next-generation Genesis Coupe or a new performance luxury sports coupe that will strengthen Hyundai’s new “modern premium image” around the globe.