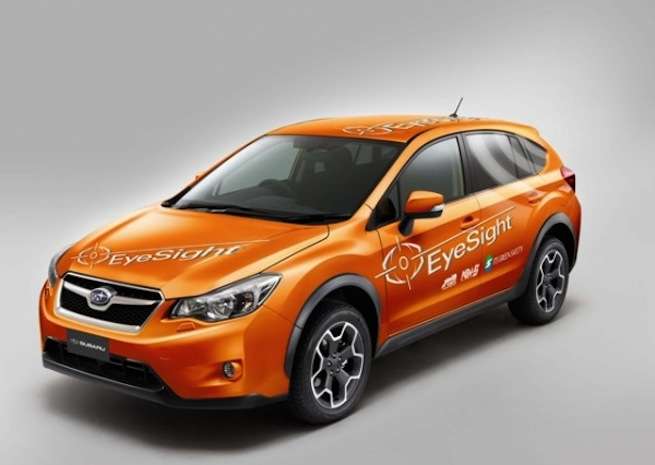 Subaru is bringing a 2014 XV Crosstrek with their next-generation EyeSight safety system to the 20th ITS WORLD CONGRESS TOKYO 2013.
Advertisement

Small Japanese automaker Subaru is running circles around the large automakers and has developed a safety system that will eliminate automobile accidents in the future. Subaru has been building the safest cars on the planet and they aren’t standing pat on past successes. The Japanese automaker has the best front crash avoidance system in the world and they just made it better. They will demonstrate it on a world stage.

Subaru Japan just announced its participation in the 20th ITS WORLD CONGRESS TOKYO 2013 where they will show the world just how good their next-gen EyeSight safety system is. The international show will be held at Tokyo Big Sight from October 14 to 18, 2013. This event consists of sessions and exhibitions which focus on intelligent transport systems (ITS). Subaru will host an exhibit with a 2014 Subaru XV Crosstrek equipped with its new "cooperative driving assistance system" called EyeSight.

Fuji Heavy Industries (FHI), the maker of Subaru automobiles, has a goal of eliminating the possibility of any and all automobile accidents. If any automaker can do it, it will be Subaru. Subaru just aced the IIHS frontal crash test with a perfect score of six points. No other automaker could come close to Subaru’s perfect score.

Now they have enhanced the already excellent EyeSight system which will begin arriving in all new Subaru models starting next year. The new 2014 XV Crosstrek they brought to the show uses the advanced system which is better than any other safety system in existence today. It’s better than the systems from Mercedes-Benz and Volvo which have been known for safety technology.

The advanced EyeSight system is effective in preventing vehicle mishaps and especially driver distracted errors. To achieve this, Subaru continues to enhance its driving assist technology "EyeSight" which is based on recognition abilities using a stereo camera system. The system processes the images gained from its stereo camera and recognizes the object before an accident occurs.

FHI’s recent development of the next-generation "EyeSight" shows just how committed the Subaru brand is to safety. And they are doing it across their whole lineup of cars. Building safe vehicles is not new for the Japanese automaker. They began their own independent crash tests in the 1960s before there was any official testing being conducted.

The new advanced EyeSight safety system on the 2014 Subaru XV Crosstrek is proof that Subaru is one step closer to the advancement towards an accident-free society. Subaru will show the world just how good this new system is at ITS WORLD CONGRESS TOKYO 2013 through an illustrative video and live presentations. Stay tuned to Torque News for the latest safety technology from Subaru.