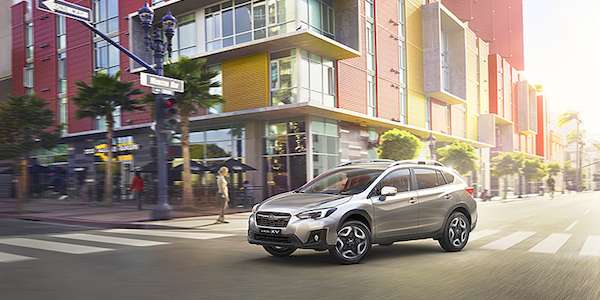 What’s Subaru biggest challenge with their new 2018 Crosstrek CUV and 3-Row SUV?; How to create buzz in the South where AWD isn’t a necessity.
Advertisement

Subaru has a bigger challenge with their new-generation 2018 Crosstrek crossover and new 3-Row SUV that’s coming next year. They are going to do well in cold-weather states, but how will the small Japanese automaker create buzz with the new-generation all-wheel-drive Crosstrek CUV and 3-Row SUV with consumers in the southern US where AWD isn’t a necessity?

Subaru vehicles are known for their all-weather capabilities, and the Cherry Hill, NJ automaker sells most of their all-wheel-drive vehicles in the cold northern states. According to IHS, the research and business analysis experts, Subaru’s market share in the northern and mountain states is 4.7 percent, while they only have 1.8 percent of the market in 16 southern states. How does Subaru plan to target consumers in warm weather states like Florida, Alabama, Georgia, Oklahoma and even Texas?

Subaru knows how to create buzz around their vehicles

It’s similar to how they’ve done it in the Northeast, Rocky Mountain states and Pacific Northwest. The brand has created buzz with their Share the Love campaign, socially conscious ads, targeting outdoor enthusiasts and connecting with millennials. They also hammer the message that their vehicles are safe and are fun-to-drive. It’s working because they are expecting growth of 9 percent in 2017. It all can’t come from northern and cold-weather states like Maine, Colorado and Washington.

Just like the SUV-alternative Outback is gaining popularity with adventure seekers in northern states, Subaru will go after those who lead active lifestyles in the South with the new 2018 Crosstrek CUV. Those that live by the Atlantic ocean can load up the surf board and take the new crossover to the beach. Subaru will also target families with the new 3-Row SUV when it arrives in 2018 who want to get away from the congested city on the weekends. There’s plenty of mountainous regions in the South from the Appalachians and Ozark Mountains for active families to travel.

Subaru will create a slightly different buzz with their new-generation 2018 Crosstrek CUV and new 3-Row SUV in the South where all-wheel-drive isn’t a necessity. Subaru’s plan will include targeting southern millennials and families who live near the Pacific ocean and mountainous regions who want a little more adventure in their lives.