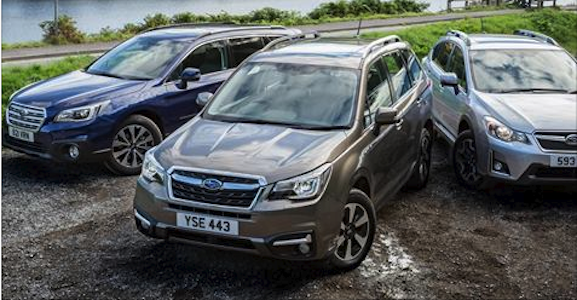 Tiny Subaru is the number one selling all-wheel-drive automaker in the world beating Audi who is number two. How do they beat larger automakers like Audi?
Advertisement

Subaru created a niche brand of all-wheel-drive cars nearly 50 years ago they are still dominating today. Tiny Subaru, who is one of the smallest automakers on the planet, is single-focused in same way when they introduced the Leone AWD wagon in 1972. The Subaru Leone Estate was the first Subaru to be fitted with the automaker’s Symmetrical All-Wheel Drive (AWD) system and this iconic car set the pace for Subaru’s niche market that is setting records today.

How does tiny Subaru do it?

Subaru’s unique niche market of all-wheel-drive vehicles in driven by their top-three sellers, the Forester SUV, Outback wagon, and XV Crosstrek crossover. The Impreza compact, Legacy sedan and WRX and WRX STI performance cars also all come standard with Subaru’s Symmetrical all-wheel-drive system. The BRZ sports coupe that shares a platform with Toyota 86, is the only model without AWD.

But Subaru doesn’t use a “one type fits all” AWD system with their multi-purpose vehicles. They all come standard with Symmetrical All-Wheel Drive, but each vehicle gets a “tailored” version of Subaru’s AWD unit to fit a particular powertrain or model.

Subaru doesn’t adapt AWD components to a front-or rear-wheel drive vehicle. Most automakers do adapt their AWD system to fit a front-drive configuration and thus they function passively, transferring torque away from the main drive wheels only when they slip. The competition equipped with such systems essentially operate in two-wheel drive when there is no slippage. They can be better than front-drive car, but don’t provide the “full-time” benefits and road handling ability that a true full-time all-wheel drive system like Subaru’s does.

Why four different versions of AWD?

All versions of Subaru Symmetrical All-Wheel Drive distribute torque to all four wheels all the time, and each is tailored to the specific vehicle’s engine, suspension and transmission setup. Each reduces the load on each wheel and reducing and even helping to prevent tire slip, especially on slippery or loose surfaces.

Subaru’s 2018 Forester SUV, Outback wagon, Crosstrek crossover, Legacy sedan, Impreza compact WRX and WRX STI performance models all come standard with one of these AWD units. Subaru’s single focus, and their four AWD versions is what sets Subaru vehicles apart from the competition. It’s why they are number one in the world and sell the most AWD vehicles on the planet, even beating out much larger automakers like Audi.