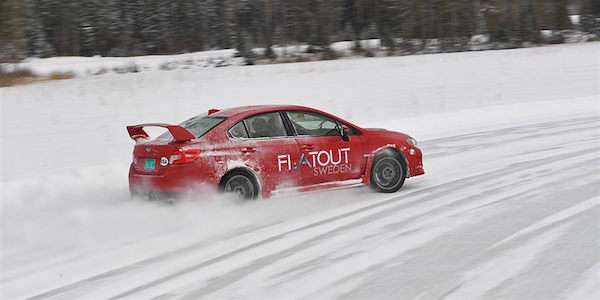 How does Patrik Sandell prepare for his new challenge in the Subaru WRX STI Global Rallycross car? It’s a bit unconventional.
Advertisement

Patrik Sandell will be behind the wheel of the newly-improved Subaru WRX STI Global Rallycross machine for the 2017 season. How he gets ready is a bit unconventional, but it works for the GRC driver from Sweden. Subaru Motorsports payed a visit to Sandell in Scandinavia to check out his driver conditioning routine where he lives in his hometowns of Are and Ostersund.

Patrik has made good use of his time at home in the off-season to prepare for the upcoming 2017 Red Bull Global Rallycross season. Sandell will be piloting one of the team’s newly-developed 2017 Subaru WRX STI Rallycross cars along with Chris Atkinson.

What better place to drive the Subaru WRX STI than on frozen lakes in central Sweden, about 400 miles northwest of Stockholm. The winters in Sweden, near the Norwegian border, offer plenty of the white stuff for Sandell to play in. It’s where you can have the most fun in an STI performance sedan, especially on a frozen lake. Sandell is doing more than having fun in the performance sedan.

Global Rallycross racing is a grueling sport and it’s demanding both physically and mentally. Early on in his racing career, the Swedish GRC driver chose to get ready for time behind the wheel by preparing physically too. In Sweden, there’s plenty to do in the winter, and Sandell spends his time daily working on balance and strength training. It may be a bit unconventional how he trains for GRC, but it works for the Swede. He straps on pair of cross country skis and heads out for a day on the mountain slopes. Anyone who's done it, knows it builds physical endurance.

Sandell also gets on his high-performance snowmobile and rides in deep power to help keep him sharp during the off-season. He can even be seen riding his fat-tire motorcycle through town in the middle of a snowstorm. But the most fun is when he gets behind the wheel of the Subaru WRX STI on the FlatOut ice track near Ostersund. The STI is fitted with special spiked ice tires to get more traction of the frozen lake. Ice driving also helps get him ready for Global Rallycross action.

Patrick Sandell is SRTUSA’s new driver and both are ready for the upcoming Red Bull Global Rallycross season. Vermont SportsCar, who manages the cars for Subaru, has been focused on a total redevelopment of the next-generation of Rallycross cars during the off season. Subaru promises a much-improved 2017 Subaru WRX STI Rallycross machine for Sandell and Atkinson to pilot. Round 1 is just around the corner in Memphis, TN, April 28-29. Stay tuned.