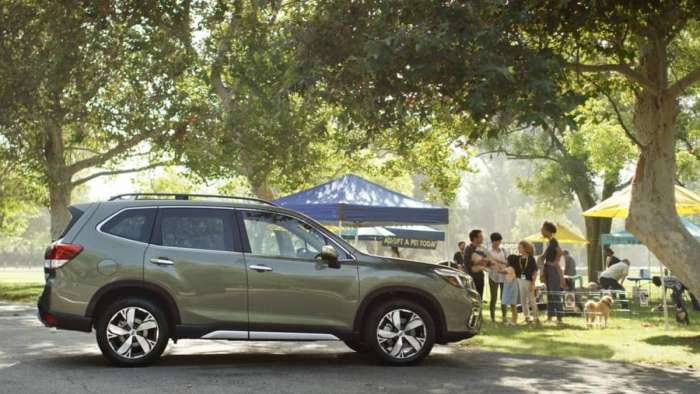 The all-new 2019 Subaru Forester earned the highest rating in a new pedestrian crash prevention rating program from the IIHS. See how it reduces insurance costs for customers.
Advertisement

Safety is a core value for Subaru Corp and they made the new Subaru Forester one of the safest small SUVs on the road. Better yet, it could help reduce insurance costs for customers. They do it with their driver-assist safety technology called EyeSight installed as standard equipment on the all-wheel-drive 2019 Forester. The newly-redesigned SUV was just tested by the Insurance Institute for Highway Safety (IIHS) and it gets the highest rating for pedestrian crash prevention.

What does that mean for customers?

In response to a renewed focus on preventing pedestrian-related collisions, the new IIHS rating program recognizes vehicles equipped with automatic emergency braking systems that can detect and, if necessary, brake for people on foot. The fifth-generation 2019 Subaru Forester does just that by using stereo cameras mounted behind the windshield next to the rearview mirror to mitigate the risk of a collision. Every Forester has this second set of eyes.

“It would be hard for human drivers to react quickly enough to brake in time if they didn’t see the pedestrian until he or she was already in the road,” IIHS Active Safety Testing manager David Aylor said in a recent Status Report issued by the institute.

A separate study from the Highway Loss Data Institute (HLDI) confirmed that Subaru’s EyeSight Driver Assist Technology is effective at preventing collisions with pedestrians. HLDI found the second-generation Subaru EyeSight reduced the rate of likely pedestrian-related insurance claims by 41 percent, compared to vehicles without the technology according to a recent study.

The redesigned 2019 Subaru Forester was also recently awarded the 2019 Top Safety Pick (TSP) rating when equipped with EyeSight, extending its streak as the longest-running TSP winner in its segment to 13 years (2007-2019). For the first time, the new Forester now comes standard with EyeSight. Subaru’s focus on safety will result in reduced insurance claims, and will likely translate to lower insurance costs for customers.