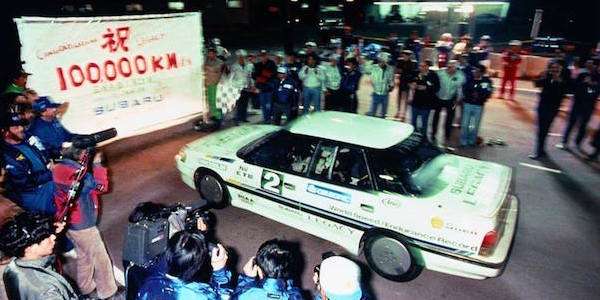 The first generation Legacy broke the World Land Endurance Record on January 21, 1989. How did this world speed record set the pace for today’s cars?
Advertisement

The Legacy was developed by Subaru to replace the Leone and it’s still a mainstay in the Subaru lineup today. Subaru set out to showcase their new engine and all-wheel-drive technologies. The small Japanese automaker showed the world what these new technologies could do by setting this world speed record. The high-performance Legacy broke the world record by maintaining an average speed of 223.345 km/h (thus completing 100,000 km in 447 hours, 44 minutes, and 9.887 seconds). The record took 18.5 days to complete and the record held until the end of April 2005.

The first-generation Legacy was released in Japan in 1989 and the sedan has its roots in rally racing. In 1993, Legacy participated in the World Rally Championship and finished in first place at the New Zealand Rally. Rally fans think of the Subaru WRX having rally roots and it does, but the Legacy was the original Subaru rally car.

The first generation Subaru Legacy set the pace for the brand's success today in a big way. The Japanese automaker learned from all the world records they set and from the championships won on the rally stages. Subaru transferred the knowledge to the cars they build today. That first world speed record set in 1989 is still playing forward.

Based on findings from Polk, an automotive data information gathering organization, found that 96 percent of Subaru Legacy sedans are still on the road today. Polk also says, 96 percent of all Subaru cars built in the last 12 years are still on the road today. These figures are based on Polk U.S. vehicles in operation registration information for MY2001-MY2013 as of January 2013.

The 1989 Subaru Legacy set the pace for Subaru’s success story. It’s about sporty driving dynamics, the boxer engine that sits low in the chassis, all-wheel-drive technology and longevity. The 2016 Subaru Outback, Forester, Crosstrek, Impreza, WRX/STI and BRZ’s DNA comes from that original Legacy sedan that set a world speed record in January, 1989.