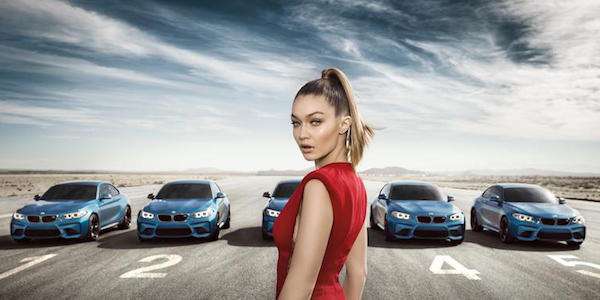 BMW M2 is a new vehicle with a new marketing plan. How did BMW hit a grand slam?
Advertisement

BMW M2 beats the competition on the track and on TV with their new marketing campaign. Their new video which you can scroll down to see below, has close to 14 million hits in the last 30 days. It’s BMW’s new M2 marketing ad “Eyes on Gigi Hadid.”

Ward Auto keeps track of marketing success and they say the M2 ad is number one. It beats out Audi, Nissan, Mazda and Honda ads. BMW’s commercial featuring fashion model Gigi Hadid claims the #1 position in the weekly Most Engaging Auto Ads rankings, powered for WardsAuto by iSpot.tv.

BMW beats the competition on TV

Audi’s promotional tie-in ad for “Captain America: Civil War” is # 2, Nissan’s spot showcasing collision-avoidance technology is #3 and Mazda’s “Carried Away” ad narrated by Aaron Paul at #4. Honda takes fifth place with a commercial about a square world where skateboarding is impossible and traffic is a nightmare unless you have a 2016 Civic Coupe.

BMW hit a grand slam with the new M2 Coupe with performance fans. Now they hit it out of the park again with their marketing of the newest M performance vehicle from BMW M GmbH. How did they do it? By connecting with a young male audience who likes fast cars and beautiful women. It's not new. It's a formula that's worked for decades.

Tsingshan's Threat to Tesla: EV Maker Is In Battery Crosshairs
Tesla-Funded Research Reveals One of The Biggest Mysteries of EV Battery
END_OF_DOCUMENT_TOKEN_TO_BE_REPLACED