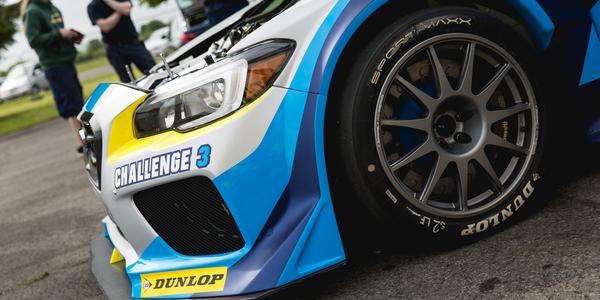 Subaru, STI and Prodrive knew they needed bigger meats under the 2016 WRX STI Time Attack car to reach their goal. The goal was to smash the old Isle of Man TT course record and that’s what they did on Saturday. They shattered the record and did it with a new one-off purpose-built car and new tires. When Mark Higgins set the record in 2014, the 2015 WRX STI was running street-legal Dunlop tires. What racing tires did they use this time?

Subaru knew the tires needed to be upgraded if they were going to set a new record with the Time Attack STI. The Isle of Man TT Road Course is long and tires are the key to any successful race car. What tires did Subaru use?

Subaru, STI and Prodrive chose the same racing tires the new Subaru Levorg used to win its first British Touring Car Championship (BTCC) race this past weekend. They shod the 2016 WRX STI with Dunlop’s medium compound Sport Maxx BTCC race tires. They aren’t street legal and they provided extra grip for the STI to stay on course at an average lap speed of 128.73 mph. That was up from the previous record of 116.47 mph set by Higgins on the road-legal meats.

James Bailey, public relations and communications director, Dunlop Motorsport says the road-legal tires wouldn’t give the the 2016 Subaru WRX STI the extra grip needed at those speeds. A blow-out on the TT course would be disastrous.

Bailey said, “The Sport Maxx BTCC tires have been developed from our on-track tire competition so it is fitting to see them help push the Subaru to the limits at the event where we are in tire wars on two wheels. Tire performance is going to be key to achieving a new record and the features that we have designed into the BTCC tire should work well. We have chosen the medium compound to offer the best combination of performance and durability which will help maintain peak performance levels around the very long lap.”

The tires are grippy

Mark Higgins likes the new meats. He says, “The Dunlop grip level was really good, we used the same tire for the practice run and the main run, which was a surprise as we expected to put new tires on every time. The performance is really good and it seems very consistent. We’ve changed the set-up on the car, we’ve gone harder and made a few tweaks, ride-height too, but the car’s not a million miles away. We can turn it up a little bit, but we’ll perhaps leave that until the very end!”

Mark Higgins broke the lap record at Isle of Man TT Road Course in the new one-off 2016 Subaru WRX STI. He did it safely on Dunlop Sport Maxx BTCC tires. Subaru is evaluating whether to make another attempt on Friday to top the record again. A fresh set of sticky Dunlop racing slicks could help Subaru do it again. Stay tuned.