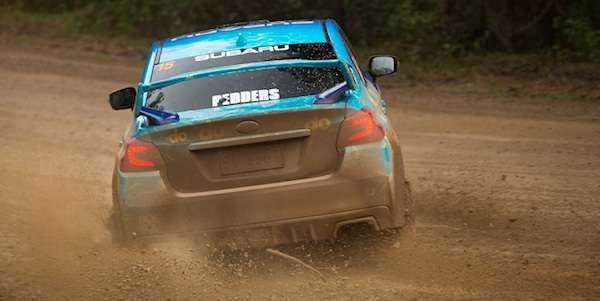 How 2016 Subaru WRX STI AWD Proves Its Worth

The AWD system of the 2016 Subaru WRX STI driven by Molly Taylor proved its worth. What happened in Australia?
Advertisement

Subaru is known for its Symmetrical all-wheel-drive system, and it came into play this weekend at the International Rally of Queensland in Australia. Molly Taylor drove the 2016 WRX STI to a fourth place finish at the rain-soaked event. Torrential rain, shortened and cancelled stages and multiple competitors didn’t finish the rally race. The Subaru AWD system got the STI through without incident.

On Heat two of the event this weekend, overnight showers degenerated into heavy rain after the first two stages. The attrition list was high, including Simon Evans rolling his car on SS11. The storms were so severe, the day’s afternoon stages had to be cancelled. A nominal 1.2 kilometer run was added to ensure the required distance was covered to enable points to apply in the Kumho Tyre Australian Rally Championship 2016.

Molly said the rally stages were extremely slick and it felt like she was driving on ice. She said after the race, “The first two stages were slippery but at least it wasn’t raining. But after that it really started pouring and it was just like driving on black ice. It almost felt like we needed studded tires for awhile.”

Subaru Australia’s team driver Molly Taylor, lifted to provisional second in the Kumho Tyre Australian Rally Drivers Championship 2016, with official standings to be confirmed. The Subaru duo of Taylor and Bill Hayes navigated at times treacherous conditions to claw their way into contention.

The Subaru WRX STI rally car is an NR4 spec car. It’s basically a showroom model with a few modifications made for the rally stages. It comes with the 2.0-liter turbocharged boxer engine that is only available in Australia in this motorsport model. The rally-ready models are for track use only and cannot be road-registered. It keeps the stock Subaru Symmetrical AWD system.

The all-wheel-drive system on the 2016 Subaru WRX STI proved its worth on the treacherous rally stages. Taylor and Hayes make it through without incident. The Championship now goes into a two and-a-half month break, with the next rally race in South Australia September 9-11.