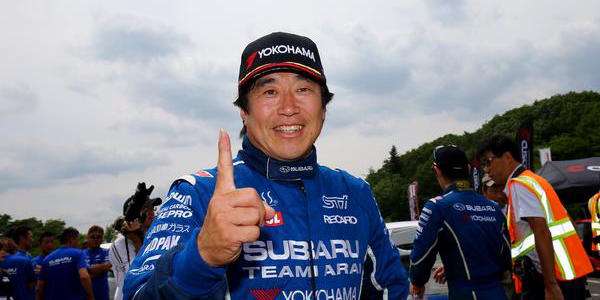 A Hot New Driver is Announced for Subaru’s WRX STI GRC Supercar, Will Age be a Factor?

Subaru adds a new driver to their WRX STI GRC team in LA. He’s a rally legend in Japan. Will age be a factor?
Advertisement

Subaru Rally Team USA has announced a new driver for the WRX STI GRC supercar for the final round in LA. He’s a Japanese rally legend and his name is Toshihiro Arai. His fans call him “Toshi”. He will be competing with teammates David Higgins and Chris Atkinson who raced in the last Seattle, WA GRC round.

A long and successful rally career

Toshi Arai comes to LA with an incredible rally career resume, driving for the Subaru World Rally Team, and he’s competed in WRC events around the globe driving the Subaru WRX STI. Arai is a two-time Production World Rally Car (PWRC) champion (2005,2007) and most recently won the 2015 Japan Rally Championship, winning five of the nine rounds.

This will be Toshihiro Arai’s first Red Bull Global Rallycross race action and there will be a learning curve for the rally champion. The top driver’s are seasoned GRC drivers and they will be banging hard again in LA as they battle to see who gets the driver championship. It’s a two-way race between Tanner Foust and Scott Speed.

GRC is a different animal

Global Rallycross is a different motorsports event where the action is fast, the cars are banging, and things happen in fractions of a second. It’s a different race compared to the rally stages where it’s the driver competing against the stage and time. The driver’s have to react quicker or they will be crunched by the other cars. Arai is a seasoned pro but will his age be a factor? It’s a younger man’s sport.

How old are the drivers?

The top five drivers in the standings are Tanner Foust 43, Scott Speed 33, Steve Arpin 33, Brian Deegan 41 and Patrik Sandell 34. Subaru’s drivers Chris Atkinson is 36, David Higgins 43 and Toshi Arai 49. This is a young man’s motorsport and Arai will be 50 in December. It could be a tough day for the Japanese champion. We wish him luck.

The future for Subaru in Global Rallycross will be Chris Atkinson who performed extremely well in his first two GRC starts. David Higgins also could be a consistent winner for Subaru. It’s cool that Subaru is giving Toshi Arai a chance to get behind the wheel of the 2016 Subaru WRX STI GRC supercar, but it could be an eye-opener for the rally champion. He’s ready to compete with the top drivers and teams at the Port of San Pedro, CA in LA October 8-9.
.
“I’m very excited to work with Subaru Rally Team USA and compete behind the wheel of a 600 horsepower Subaru WRX STI rallycross car,” stated Arai. “I’ve kept a close watch on Red Bull GRC so I really look forward to the opportunity Subaru has offered me to race in the series.”