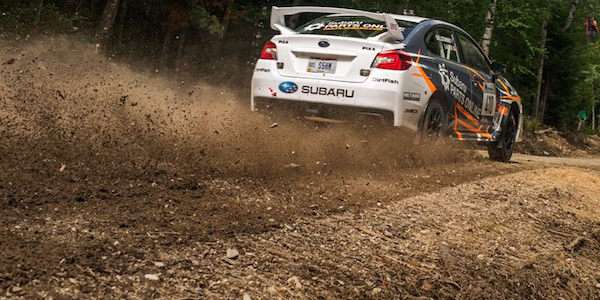 It was the opposite result most expected at NEFR. Higgins wrecks his Subaru WRX STI, Lasek gets a podium finish.
Advertisement

For Bucky Lasek, NEFR was his first gravel rally event ever, and they were hoping he could keep the new 2016 Subaru WRX STI on the rally stages without incident. He did and gets a podium finish. The veterans Higgins and Drew, were expected to dominate, but it was a very different finish than expected. What happened at New England Forester Rally?

The first day on Friday went off as expected for SRTUSA and the two 2016 Subaru WRX STIs. Higgins and Drew were out in front and led the rally race after the first three stages. Bucky Lasek and co-driver Rhianon Gelsomino were in fourth place at the end of the day. They just wanted to run a clean race. Lasek, stated, “I think it's most important to finish here at NEFR. With that being said I will be saving the car over certain spots and pushing hard where I can. I just have to be smart.”

It was Lasek who stuck to the plan and Higgins who got off course and crashed at NEFR. Higgins went out early on Day 2 after attacking stage 4. The duo was going full speed in one part of the stage in 6th gear when they hit a bump in the road and landed hard. The car suffered damage as it pushed the damper up into the sheet metal, and the WRX STI was done for the day. The car could not be repaired and Higgins and Drew had a Did Not Finish (DNF) at NEFR.

Lasek and Gelsomino continued to keep the #410 2016 Subaru WRX STI on the gravel rally stages without incident. They stuck to their plan and ran a clean race. Bucky Lasek runs his first gravel rally event ever and finished in third place for a podium finish. They finished 7 minutes, 11.2 seconds behind Troy Miller / Jeremy Miller in their 2011 Subaru WRX STI who took first place and in second was Agatino Fortunato / Claudia Pullen in the 2016 Subaru WRX STI.

Go to Page 2: Higgins still on pace for Drivers Championship

David Higgins currently leads the Rally America Championship and is still on pace to earn his 6th straight Driver’s Championship in the series. It didn’t happen at NEFR. Next up for the two 2016 Subaru WRX STIs is the Ojibwa Forests Rally August 26-27, Detroit Lakes, Minnesota. Can Higgins do it in Minnesota? Stay tuned.