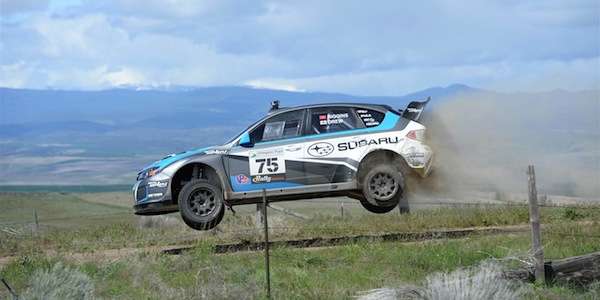 The 2014 Oregon Trail Rally results are in and the 2014 Subaru WRX STI Rally team takes a one-two-finish. Higgins wins it in spectacular fashion.
Advertisement

David Higgins and Craig Drew won the 2014 Oregon Trail Rally this weekend and they did it in spectacular fashion. Higgins wouldn’t let a shredded tire keep him from winning the Oregon Trail Rally. This is the longest Rally in the series with three days of stress on the cars and drivers. The Subaru Rally team took home two podium spots as they won first and second place finishes. But it was a battle between the two new Subaru WRX STI Rally cars.

Friday, Higgins and Drew were in the #3 start position, with teammates Travis Pastrana and Chrissie Beavis immediately behind. After the first two stages, Higgins had a 0.6 second lead, but it was short lived. When the cars left service for the second set of stages, Pastrana & Beavis ran slightly faster and ended the day with the overall lead.

The SRT USA #75 WRX STI piloted by David Higgins and Craig Drew got off to a rough start on Saturday. Less than a mile into the second stage at Big Boyd (15.20 miles) they got a puncture in the left rear tire, but this didn’t stop the Championship team. They didn’t want to lose valuable time by stopping to change the tire, so they kept the hammer down and finished the long stage.

The #75 WRX STI tire completely shredded after after about five miles, but they continued to run the remainder of the stage that even including a tarmac section on the bare Method Race Wheel. This impressive performance running on the bare wheel kept Higgins and Drew within 1:07.5 seconds behind teammates Travis Pastrana and Chrissie Beavis. SRT USA #75 made steady gains and won all the other stages during day two of the Oregon Trail Rally but remained in the second spot overall.

Travis Pastrana and Chrissie Beavis in the #199 2014 Subaru WRX STI ran a flawless race and extending their overall lead. This was even more impressive as this was only their second event together. Pastrana demonstrated amazing driving skills in the new SRT USA #199 WRX STI despite being away from the sport for a few years.

Day three was a sunny day and perfect for the Oregon Trail Rally. Higgins and Drew charged hard from behind all day and were able to overtake Pastrana and Beavis to win the event. They finished with a big lead of 3:37.4 to win the third race of the season.

Next up is the Susquehannock Trail Performance Rally in Wellsboro, Pennsylvania May 30-31. STPR as it is known, is one of the most exciting rallies on the Rally America circuit. It features smooth tree-lined roads and the addition of night stages ups the ante even more. Congratulations to the Subaru Rally team for taking a one-two finish in the 2014 Subaru WRX STI rally cars. Higgins and Drew showed why they are champions and won it in spectacular fashion.