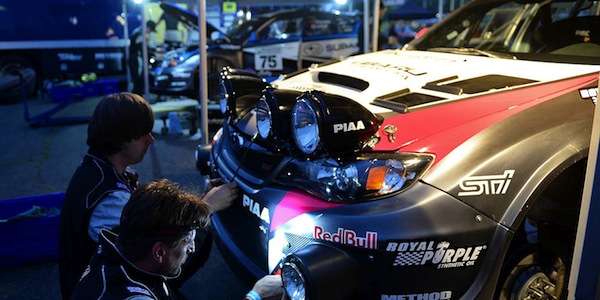 The Oregon Trail Rally is underway with day two finished. What is going on with the Subaru WRX STI team?
Advertisement

The Oregon Trail Rally is the only 3-day rally event in the Championship Series. It’s an extra day of racing and stress on the Subaru WRX STI cars and drivers. The race this weekend takes place in urban Portland, OR and through the Mt. Hood farmlands outside the city. This rally is always packed with excitement as the race takes the cars through twisting mountain foothills and fast stretches of wide-open unobstructed areas.

Day one of the 2014 Oregon Trail Rally got underway on Friday at the Portland International Raceway. Rally fans flooded the infield and with Travis Pastrana back with Subaru Rally Team USA, it was hectic with spectators and autographs being singed by Pastrana and Higgins between stages.

The race started with David Higgins and Craig Drew in the #3 start position, with teammates Travis Pastrana and Chrissie Beavis immediately behind. After the first two stages, Higgins and Drew had a 0.6 second lead, but it was short lived. When the cars left service for the second set of stages, Pastrana and Beavis ran slightly faster and ended the day with the overall lead.

Day 2 on Saturday saw Subaru Rally Team USA's Travis Pastrana and Chrissie Beavis start with a 4.4 second lead over teammates David Higgins and Craig Drew. Pastrana showed flashes of brilliance at the Portland International Raceways stages after a long absence from the sport. It looks like he has found his grove in his second race.

David Higgins and Craig Drew have seen some bad luck since Pastrana has returned to the Subaru team. In the last race they experience mechanical issues and were unable to finish. Yesterday, David Higgins and Craig Drew's Subaru WRX STI was observed at the end of stage 8 with a smoking engine. We aren’t sure what the problem was, and the tech team likely worked all night to fix the problem for today’s finish of stages 13-18.

After twelve stages, Travis Pastrana and Chrissie Beavis lead the Oregon Trail Rally by 39.3 seconds ahead of David Higgins and Craig Drew. Stay tuned to Torque News for the latest race results from the Subaru WRX STI Rally team this weekend.