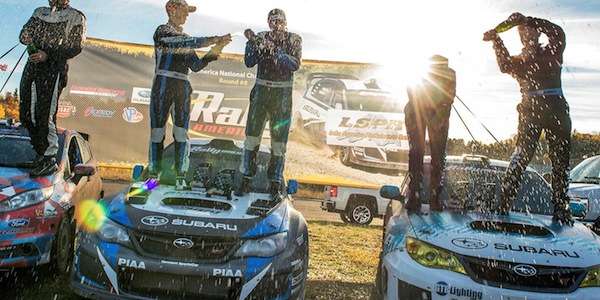 David Higgins pilots the Subaru WRX STI to a wet and muddy win in the final rally race at LSPR. What happened to Travis Pastrana?
Advertisement

It was a wet weekend at the 2014 Lake Superior Performance Rally, but David Higgins and Craig Drew running the #1 Subaru WRX STI pulled out another victory to finish the season on a high. Temperatures hovered in the lower 40’s while precipitation ranged from mist to heavy rain all day on Friday making for very challenging conditions. The roads were turned into mud troughs and there was very little grip for the rally cars. Subaru brought the new 2015 WRX STI rally car to the event for fans to see, but it didn’t see action.

Higgins jumps out in front on day 1

Higgins and Drew running the #1 2014 WRX STI, took an early lead and stayed in front of teammates Travis Pastrana and Chrissie Beavis who immediately attacked at full speed. After 8 stages, Higgins and Drew were ahead of their teammates by only eight seconds. They extended the lead to twenty-two seconds after the remaining Friday stages were completed. With six stages to go on Saturday, Pastrana and Beavis were all in as they battled for the win.

The roads were waterlogged and muddy

On Saturday, the water levels continued to increase on some roads throughout the day, creating small ponds that racers tackled as best as they could. The Subaru WRX STIs handled the waterlogged roads without trouble although lack of grip was a significant issue. The resistance through the water holes was dramatic and Higgins commented that during Stage 15, Herman and Nestoria’s WRX STI almost came to a complete stop, as the water was so deep and extensive.

Pastrana gets a DNF

Travis Pastrana and Chrissie Beavis, during a fast right hand turn on Stage 13, went wide and got pulled into the soft edge. The car was stuck deep in mud and despite a significant effort to free the car, they were unable to do so within the allotted maximum time. Pastrana and Beavis were not able to finish and ended an otherwise great event for SRT USA #199. The close competition between Higgins and Pastrana was exciting for the Michigan rally fans and made for another great event.

4 Championships in a row

David Higgins and Craig Drew in the #1 Subaru WRX STI completed day two of the 2014 Lake Superior Performance Rally in first place ending a very successful season on a high note. This weekends Lake Superior Performance Rally in Michigan wraps up the 2014 Rally America National Championship Series. It was an incredible year for Subaru Rally Team USA as Higgins and Drew win their fourth Rally America National Championship in a row. Next year we look forward to seeing the new 2015 WRX STI Super Production Rally Car.