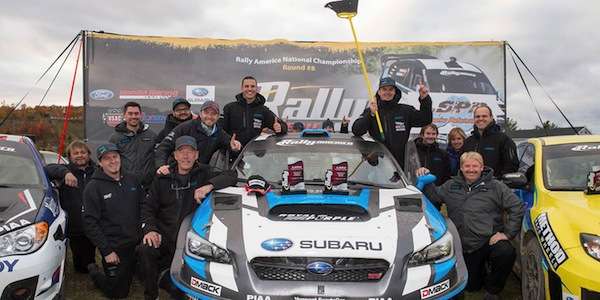 David Higgins and Craig Drew pulled off a perfect season in the 2015 Subaru WRX STI at LSPR.
Advertisement

They brought out a broom for David Higgins after he and co-driver Craig Drew made a clean sweep of the Rally America Championship yesterday. The last time it was accomplished was 28 years ago by SRT USA team manager John Buffum. Higgins and Drew achieved the perfect season in the Rally America 2015 season in the 2015 Subaru WRX STI at LSPR this weekend. It was a victory that took a team effort from Subaru Rally Team USA for eight rounds.

It was a special season that will go down in the record books as perfect, and it took eight grueling rounds for Higgins and Drew to pull it off. Subaru is running a new car this year, the new 2015 Subaru WRX STI dubbed the VT15r and SRT USA has done a masterful job getting the performance Subaru ready for every race on the Rally America Championship schedule.

The Lake Superior Performance Rally was the perfect ending to an awesome season. The stages are more like what Higgins and Drew grew up with back in the UK: wet, muddy and slippery stages, “proper rallying!” says Drew. The stages were in good condition but it wasn’t a walk in the park this weekend.

Operational delays throughout the day on Saturday added an extra level of stress for drivers who have to wait indefinitely for stages to begin while remaining mentally prepared and the expectations for them to win were huge. After the big win, Higgins remarked "It was a hell of a long weekend. It is amazing to do what we have done, but you can only do it with a great team like we have. Craig has been awesome as always and we have been on a good winning streak for a long time, but this win was special.”

Buffum knows what it took to pull off a clean sweep and added, "It is definitely difficult to achieve a perfect season, obviously it has not been done for a long time. It takes not only a skilled driver and navigator, but also a reliable car. The 2015 Subaru WRX STI was a key piece in what helped David and Craig reach this success. Most of all, it takes a great team.”

Higgins and Drew did something no team has accomplished since 1987: they earned a clean sweep in the Rally America National Championship 2015. It took a lot of effort from the team to pull it off in the newly developed 2015 Subaru WRX STI. Congratulations to the entire SRT USA team.