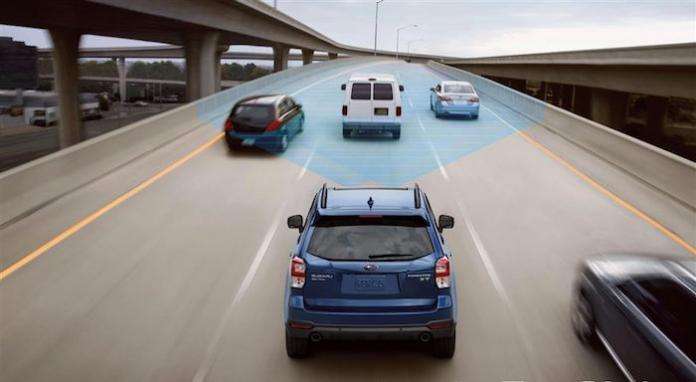 AEB helps reduce accidents, and Subaru along with two luxury automakers have the best systems. How does tiny Subaru do it?
Advertisement

Subaru says they want to be the overall safety leader, and they are proving it with a safety system called AEB. When it comes to automatic emergency braking (AEB) systems, Subaru customers are the most satisfied along with two top luxury brands. According to a study by Consumer Reports, cars equipped with AEB, Infiniti, Tesla, and Subaru owners were the happiest with the safety feature, with more than 74 percent of vehicles rated at very satisfied. Why should you want a vehicle equipped with AEB?

AEB systems have proven to significantly reduce accidents in vehicles equipped with this technology. The safety system senses a potential collision, and if you don’t react in time, it starts braking for you. Subaru offers this technology on most of their vehicles, and in a recent study in Japan, they found all Subaru vehicles, when equipped with their driver assist system called EyeSight, had fewer accidents than non-equipped vehicles. Read about the study here.

How does EyeSight work?

Subaru’s EyeSight uses stereo cameras mounted at the top of the windscreen, capturing “live” images of the road ahead. The car recognizes potentially dangerous situations and can alert the driver if they are distracted and help prevent accidents. This can help prevent collisions and reduce impact damage. The new generation EyeSight system is featured in the 2018 Subaru Forester, Outback, Crosstrek, WRX, Impreza and Legacy models.

What else did CR find?

In a TorqueNews report by John Goreham yesterday, Consumer Reports found 69 percent of vehicle owners with AEB report they are "Very Satisfied." Only 3 percent report that they find the system annoying. CR Consumer Reports also found that Mazda and Acura customers were the least satisfied with their vehicle’s AEB system. These owners were mostly “irked” by the feature’s oversensitivity, and CR said Jeep registered the highest level of false alerts, at 40 percent.

Subaru’s new-generation EyeSight safety system is catching on with consumers and according to this new study by Consumer Reports, Subaru, along with luxury brands Infinity and Tesla, their owners are the happiest with the vehicle’s AEB system. The 2018 Subaru Forester, Outback, Crosstrek, Impreza, WRX and Legacy models, equipped with EyeSight, are also rated the highest in the U.S., Australia and European safety tests.