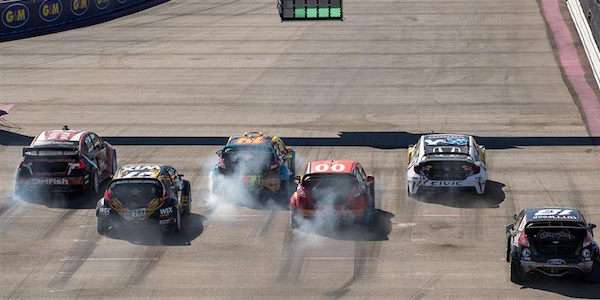 Can a Subaru WRX STI GRC car really beat the fastest production car on the planet from 0-60 mph? Yes.
Advertisement

Check out the video below from Engineering Explained and they talk about how a 2.0-liter Global Rallycross Supercar can hit 60 mph in 1.9 seconds. It takes a Venom GT, (the world's fastest production car) from 5.6 seconds 0-100 mph thanks to its 7.0-liter Twin Turbocharged V8 engine.

The engine in the WRX STI Global Rallycross cars driven by Chris Atkinson, and David Higgins produce about 600 horsepower, and over 650 lb-ft of torque. They blister the pavement rocketing these machines from 0-60 in as fast as 1.9 seconds. Amazing right?

That’s faster than any production vehicle on the planet. GRC regulations limit all cars to 2.0-liters max. It doesn’t seem like much, but Subaru, VW, Ford and Honda engineers get around 600hp from these small mills. How do they achieve such mind blowing acceleration?

It starts with all-wheel-drive, which is Subaru’s specialty. Next, they have an insane power to weight ratio. These GRC WRX STI cars have a minimum weight of 2921 lbs. and that includes the driver and all fluids. The WRX STI GRC supercars are carrying less than 5 lbs. of weight for every horsepower the engine produces.