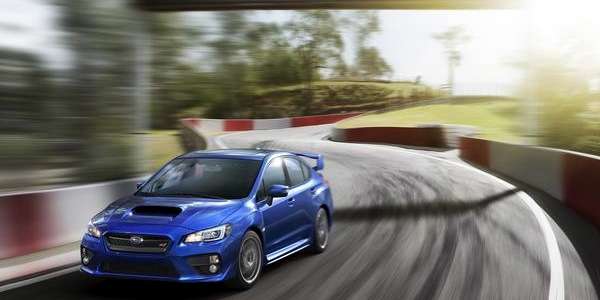 Hear 8 experts as they react to the remarkable track-day performance of the new 2015 WRX STI and give their driving impressions.
Advertisement

Before Subaru ever let the new-generation 2015 WRX STI hit the streets, they got the driving impressions of eight top experts. Subaru says they needed to “make sure the new STI received the nod of approval from industry experts and pro drivers” before they released the new performance sedan to their loyal fans. We think they already knew the 2015 WRX STI would stand the test of these eight guys, but they took them to Laguna Seca Raceway near San Francisco for the final test.

Who were the 8 experts?

Subaru had two of their own Subaru Rally Team drivers Bucky Lasek and David Higgins. They also took Ian Armstrong of COBB Tuning, Martin Musial of AMS Performance, Tony Barber of Turn In Concepts, Butch Eccles of ScoobyTuner, Travis Barnes of Snail Performance, and Gary Castillo of Design Craft Fabrication. They assembled an impressive team of industry experts and then put the newest WRX STI through the paces at Laguna Seca.

Why did they choose this track?

Laguna Seca is a great place for Subaru to demonstrate the capabilities of the new 2015 WRX STI. Laguna Seca is a paved racing track in central California used for major races such as Moto GP and the American Le Mans Series. The 2.24 mile mid-to-low-speed track features many technical corners along with its infamous “Corkscrew”, a steep downhill S turn with a 49 foot difference in height. The drivers could push the 2015 WRX STI hard and navigate the S curves at full speeds.

The all-new 2015 Subaru WRX STI gets upgrades over the previous generation model with performance improvements like new hydraulic steering with a quicker ratio, a new stiffer chassis, enhanced handling, and Active Torque Vectoring. These new enhancements enable the new STI to perform better than many more expensive sports cars. Subaru and STI have moved the car forward from the previous generation in terms of improving the chassis and body to better utilize and match the power of the 305 hp 2.5-liter turbo boxer.

Watch the Laguna Seca track footage and get driving impressions from these eight experts and hear their comments on the remarkable track-day performance of the STI. Build your own 2015 Subaru WRX STI here.