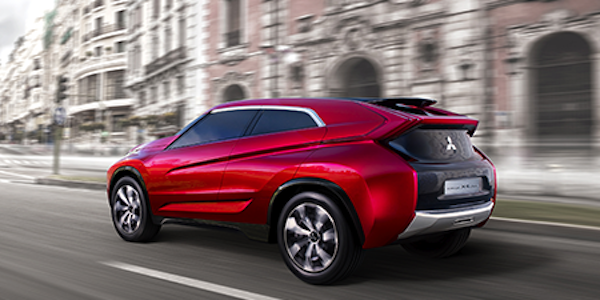 The 2015 Mitsubishi Lancer Evolution and Dodge Charger Hellcat are on their way out. What’s this new eco-performance technology about?
Advertisement

Mitsubishi is showing the world the future of performance cars and it’s here now at the Paris Motor Show 2014. They brought the hot new Outlander PHEV Concept-S, a concept car based on Outlander PHEV, and it’s one of the hottest attractions at the 2014 Paris Motor Show. But Mitsubishi Motors Corporation (MMC) also brought what could be the next-generation Lancer Evolution to the show called Mitsubishi Concept XR-PHEV.

On display in Paris now

The technology is here today and Mitsubishi brings it to Paris to show to the world. The new Outlander PHEV Concept-S brings a "Sporty and Sophisticated" design theme that conveys the next-generation SUV driving dynamics provided by the powerful and sporty, “yet quiet and advanced” performance of its Plug-in Hybrid EV System with Twin Motor 4WD. It’s already been tested at Pikes Peak with MiEV Evolution III and the grueling Asian Rally with the Outlander PHEV.

The new eco-performance technology is here

The Mitsubishi Concept XR-PHEV brings a new athletic body with dynamic front-to-side character lines that makes it an athletic SUV. It features the MMC’s newly developed FF-type Plug-in Hybrid EV System and more advanced active safety technology. It’s made possible by Connected Car technology that will deliver agility, safety and eco performance. This is being developed for a new generation who will be ready to accept this new high-performance technology.

Gas-guzzling Dodge Charger SRT Hellcat is on its way out

The new Concept XR-PHEV could very well be a forerunner to the Mitsubishi Lancer Evolution successor. The gas-guzzling Dodge Charger SRT Hellcat is creating excitement with an older generation of Muscle Car fans who are stuck in the past. But there is a new day dawning for a younger generation of performance fans who will accept this new eco-performance technology that’s even more exciting. A new generation is being awakened to what performance cars will look like very soon.

brian wrote on October 14, 2014 - 2:55pm Permalink
Denis, what does on it's way out mean if you say they aren't going anywhere? I was an ASE master tech for 20 years, EV cars are cool and full of torque, but the a rabs are going to sell that oil for $10 a barrel if they have to. We will both be dead before electric vehicles capture even 25% of the market. Besides even my 20 year old son loves a stick with a wicked exhaust note! La La land is where you are headed.
Eli_san wrote on October 17, 2014 - 3:51pm Permalink
Muscle is alive and well and will be for decades to come. The fact that the HellCat is the most talked about car and the moment shows the momentum of muscle. Maybe your article relates more to countries like Japan or China. I do agree high powered compact cars are hot right now and perform incredibly but the HellCat is here to stay.
DrivingBy wrote on October 31, 2014 - 5:10am Permalink
Let's see: The Future is here and this is demonstrated with No performance numbers No test drive No actual car, just a prototype drivetrain which has run a couple publicity demos. Sorry, electric whine and CVT drone do not a performance car make, no matter how fast. Tesla's the exception, as they've engineered it to a $100K price point. Even then, it still sounds like a muffled radio-control toy.