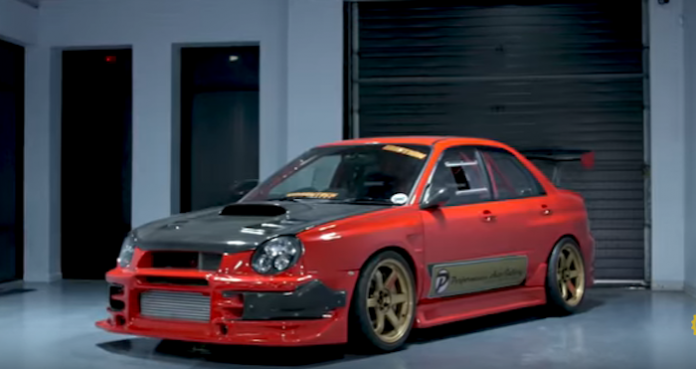 A Subaru fan dumps $250K into his 2002 WRX Bugeye. The car is now banned from competing in car shows.
Advertisement

Alex Witkin took a 2002 Subaru WRX and turned it into what is likely the most expensive Subaru show car ever. The 2002 WRX Bugeye has been completely redone top to bottom and gets extensive mods. This WRX features a completely built boxer engine, and the engine compartment has been shaved and tubbed to fit the extra turbo tubing.

The front fenders are 20mm wider than stock, the exterior is Ferrari Testarossa Red with a carbon fiber black hood, carbon fiber panels inside, 10 point roll cage, and it’s even been converted to right-hand-drive (while we aren’t sure why, since it lives in the U.S.). It also comes with an on-board air jack system that raises the car a few inches off the ground for ease of wheel changing.

Alex took the car to Wicked Fest 2013 in New Jersey where the WRX made its debut and it took best-of show. It took multiple best-of-shows after that and now they won’t let him compete because the WRX is the top car at every show he attends.

How much did he spend?

Alex spent north of $250,000 on his 2002 Bugeye show car. The build evolved over time, but Alex used the car to market his Performance Auto Gallery business where he sells specialty performance and high-end collector cars. We think it’s much better than throwing money away on advertising. At least he has a fun car to show for his marketing dollars. And he can even drive it on the street when it’s tuned properly.

Alex also has a 2002 Subaru WRX street-able daily driver with mild mods. Turbo XS in Gaithersburg, MD helped him tune the car with a Cobb access port so it’s a good mix with enough horsepower but not too much where he’s not going to be able to pass emissions. He can ride in this WRX with his dog and still have fun.

Check out the video below and listen to Alex talk about his $250K 2002 Subaru WRX show car and what it took to build this incredible machine.