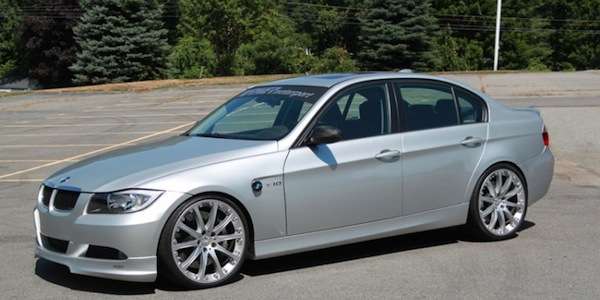 The ultra-rare Hartge H50 V10 BMW E90 Sedan started life as a 2006 U.S. spec BMW 325i sedan that was shipped to Germany and received some extreme power modifications. It came back to the U.S. with a V10 powerplant, 550 horsepower, 391 lb. ft of torque and will launch from 0-60 in 4.3 seconds with a top speed of 200 mph. And there is only one Hartge H50 in the United States, and only ten exist worldwide.

How much does it cost?

All factory features are functioning

The Hartge H50 Conversion features the highest quality of workmanship and all factory features are still functioning. Turner Motorsports says all of the practical functionality of a stock BMW has not been compromised during its conversion and the OBD port and factory check engine lights still function like stock.

The ultra-exclusive Hartge H50 V10 BMW E90 Sedan is the ultimate sleeper. Edmunds Inside Line said, "A 200-mph BMW 3 Series is one of those deviant cars that we're just happy to see from time to time. The fact that this one is every bit as easy to live with as the slightly more upmarket M5 makes it the ultimate sleeper."

The Hartge H50 has the practicality of a 3 Series with four seats, highway cruising capability but comes with lots of carbon fiber parts and weights in at just 3,680 lbs, an impressive figure with its 550 hp.

European Car says, "Beyond such shenanigans, everyday use is absolutely not out of the question. Just leave DTC on and Power off. The default setting for the seven-speed SMG III (pulled also from the E60) shift rhythm, however, is always at Level Five. For me, this is great since I do that anyway in either the M5 or M6. You can tell Hartge that you don't want full-time Level Five as the default, sure, but that would, in turn, make you a wuss."

The exclusive Hartge H50 V10 BMW E90 Sedan is the ultimate sleeper and is available for purchase now from Turner Motorsport for $105,000. Serious buyers can contact the Amesbury tuner to get more information and to schedule a test drive. You can probably take your time because it looks like this car has been for sale since 2011 and won't be selling anytime soon.