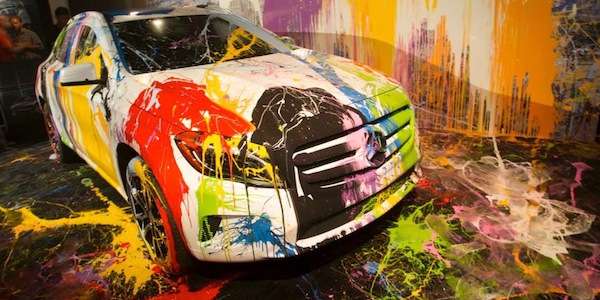 The 2015 Mercedes-Benz GLA-Class was at the Evolution Tour with Alabama Shakes. Why did it get plastered with paint?
Advertisement

The all-new 2015 Mercedes-Benz GLA-Class is on tour with the Evolution Tour and got plastered at the sold out Alabama Shakes show. The beautiful GLA-Class started out the night in brilliant white but ended up getting plastered with red, yellow, blue, black and green paint before the concert was over. It looked like show-goers had a fun time throwing paint all over the newest compact luxury SUV from Mercedes. Why did they do it?

This is all well-planned marketing by the German automaker as they tour the new 2014 CLA-Class and 2015 GLA-Class on the Evolution Tour that is making its way around the country. It’s all designed to attract new millennial buyers to the brand and it’s working. The packed show saw hundreds of Alabama Shakes fans rock Terminal 5 in New York City. But this was only the first of nine intimate, coast-to-coast concerts.

Free test drives in the GLA and CLA

Mercedes is offering test-drives in the CLA and GLA in a number of cities across the U.S. and after the test drive, you get a chance to win tickets to see Alabama Shakes, Young the Giant and Mayer Hawthorne. And fans get to have a party with the new CLA-Class and GLA-Class luxury compacts during the shows.

Each concert series features the three bands who will be playing to an intimate, invite-only audience. This is brilliant marketing by the German automaker as they attract a new buyer to the luxury brand. Mercedes wants to get new millennial buyers into their cars, and once you test drive the new luxury compacts, they hope you will be hooked.

Eight more concerts across the U.S.

This Evolution Tour will be coming next to San Francisco, Los Angeles, Dallas, Chicago, New Orleans, Atlanta, Miami and Washington DC. Mercedes is offering test drives in more cities like Philadelphia, Minneapolis, Houston, and West Palm Beach. There are specific dates for the test drives and you can choose the location that is nearest you. You will then get a chance to win 2 tickets to any Evolution Tour stop.

How to schedule a test drive

There is still time to schedule a test drive and get a chance to win free tickets. It looks like the show was a huge success for Mercedes as Alabama Shakes played to a packed out venue held at Terminal 5 in New York City. But this was only the first of nine intimate, coast-to-coast concerts.

To schedule your test drive in the 2014 Mercedes-Benz CLA-Class four door coupe or the 2015 GLA-Class compact SUV. Click here to find out how you could win your exclusive tickets to the Evolution Tour. You might even be able to put your own custom paint job on a new GLA-Class.