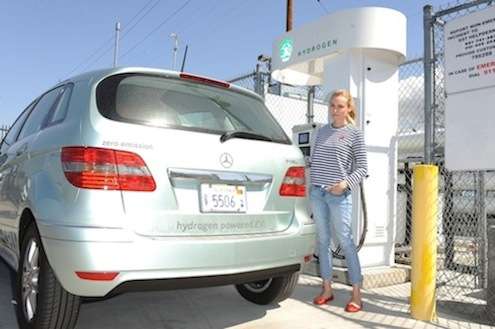 Actress Diane Kruger and other eco-conscious consumers hit the road with the hydrogen-powered Mercedes-Benz F-Cell.
Advertisement

Actress Diane Kruger is one of more than 35 environmental enthusiasts and early adopters to drive the Mercedes-Benz B-Class F-CELL. In a recent press release issued by Mercedes, Kruger, who stars in "Farewell, My Queen," drives the emission-free B-Class F-CELL and was photographed at a fueling station in Los Angeles. It is a popular vehicle with the Hollywood crowd and produces no emissions, but only pure water.

The photo had to be taken quickly because the fuel tank can be filled in just three minutes. “I’m excited to be driving the F-CELL. It’s environmentally conscious, fun to drive and gets lots of attention on the streets”, says Diane Kruger. “I can travel around 245 miles on a full tank and it’s easy to refuel.” The B-Class F-CELL converts compressed hydrogen into electricity to deliver a range of up to 240 miles, and an average of 55 mpg equivalent while emitting only water vapor.

The Mercedes-Benz B-Class F-CELL generates its own electricity

The F-CELL is powered by a 100-kilowatt (136-hp) electric motor that produces 214 lb-ft of torque. This electric vehicle with fuel cells from Mercedes-Benz generates electricity on board in a chemical reaction between hydrogen and oxygen. Electrical energy is stored in a liquid-cooled array of lithium-ion batteries with a storage capacity exceeding 1.4 kilowatt-hours.

The F-Cell is a front-wheel-drive vehicle with electric power-steering assist and an electric air-conditioning compressor. As you would expect from Mercedes-Benz, the vehicle is a luxury model which appeals to Hollywood’s film makers and acting community. The F-CELL will seat five and carry a fair amount of luggage. The second-row seatbacks fold forward, increasing cargo volume from 19 to 54 cubic feet.

Like the hybrid vehicles most people are accustomed to, the F-CELL uses regenerative braking to help the battery pack stay fully charged. For its weight, the vehicle performs decently, capable of reaching 0-60 in 11.4 seconds and having a top speed of 106 mph.

Mercedes-Benz has a selection of alternative-fuel vehicles

As well as the B-Class F-CELL, Mercedes-Benz has a selection of other vehicles with alternative drive systems, ranging from clean BlueTEC diesel models to hybrid vehicles such as the S 400 HYBRID. The S 400 HYBRID features a convenient start/stop function, which switches off the gasoline engine if the car slows to below 15 km/h, when stopping at traffic lights. Mercedes-Benz will launch the E 400 HYBRID in the U.S. in 2012.

Look for Mercedes-Benz to launch an updated B-Class F-CELL for 2015 in California. Stay tuned for more details.