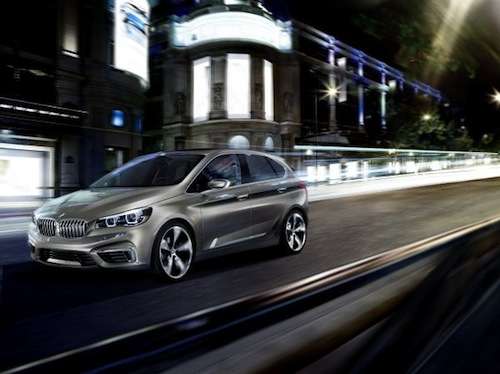 BMW has revealed the future of their premium compacts in the Concept Active Tourer just ahead of the 2012 Paris Auto Show.
Advertisement

Even though the Active Tourer is a concept, this car will likely make it to production in 2014 or possibly in 2013. The biggest news is that we are witnessing what BMW is planning for future driveline variants in a core model for the BMW brand. The eDrive powertrain from the BMW i8 is used and it features all components of the electric drive, the electric motor developed by BMW, the lithium-ion battery and the intelligent engine control unit.

A new generation of BMW engines

The new front-drive Concept Active Tourer is powered by a 1.5-liter turbocharged three-cylinder gas engine and is coupled to an electric motor. The plug-in-hybrid will have a range of up to 18 miles on electric-only drive thanks to the hybrid-plug-in battery pack. When battery power is depleted, the gasoline engine is used to motivate the premium compact which can recharge the battery while driving. The lithium-ion battery can be charged at any 220 volt household power outlet.

The 1.5-liter engine and electric motor combine for 190 horsepower and will power the Active Tourer from 0-62 mph in under 8 seconds. The BMW Concept Active Tourer has a top speed of 124 mph. BMW claims that the concept will achieve an average fuel consumption of 94 mpg. That's impressive for a hybrid-plug-in that offers that kind of performance.

The new 1.5-liter three-cylinder gas powerplant represents a new generation of engine for BMW. It uses BMW’s TwinPower Turbo Technology and adds the latest generation of High Precision Injection with the fully variable valve control system VALVETRONIC. This new technology will be used in all of BMW Group's Efficient Dynamics engine family in the future. BMW says the new compact in-line engine will deliver both performance and efficiency.

The ECO PRO is linked to the navigation system and will automatically calculate the driver’s style of driving and use the data to determine the lowest level of fuel consumption to reach a given destination. The system uses a preview assistant that gives the driver tips such as "Remove foot from accelerator" if conditions in the road change. The automatic transmission also uses the same system to “optimize” the electronic transmission control for efficiency.

The ECO PRO mode can also activate a coasting mode between 31 and 99 mph and actually deactivates the gas engine from speeds up to 77 mph. It also decouples the engine from the drivetrain up to a speed of 99 mph, allowing full use of the available kinetic energy.

Inside, the Concept Active Tourer has seating for five and maximizes the space even with the additional battery pack. The concept car has a fairly small footprint measuring 171 long, 72 inches wide, and 61 inches tall and is slightly taller and wider than the 1-Series. Interior features include a “cool shade” panorama roof, a full color Head-Up-Display and a Travel and Comfort System that uses a unique metal track that allows folding tables and a tablet computer to be used by rear passengers.

The front-drive, three-cylinder, plug-in-hybrid is a big departure from BMW vehicles in the past, but the Active Tourer is what the future of the German automakers premium compact segment will look like in the near future. The BMW Concept Active Tourer will be unveiled at the 2012 Paris Auto Show later this month.