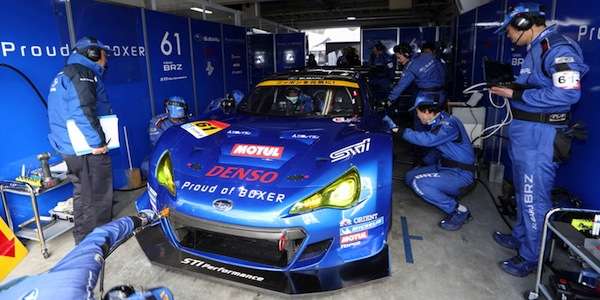 Can 2014 Subaru BRZ GT300 win the championship this season?

The Subaru BRZ GT300 missed the championship last season in spite of winning the pole position 5 times last year. The BRZ GT300 was extremely fast but still failed to bring home the championship. What will it take this year to win it all? The SUPER GT official testing is carried out at the Okayama International Circuit in Japan and the 2014 Subaru BRZ GT300 has just completed its first official test. What did the team find out?

The team of R&D Sport brought the BRZ race car to the track and ran 200 laps in two days to complete the first testing. They have made some changes to the race car this year that should make a difference. The BRZ is already the ideal machine for the task because of the Boxer engine design that sit low in the chassis. This helps the BRZ to be an excellent cornering race car.

The R&D Sport team has added new Michelin tires and a new brake system to the car that they are expecting will help in the long race. Speed is important, but that was not an issue last season. The team is looking for more consistent performance from the BRZ GT300 this year.

The new 2014 Subaru BRZ GT300 will need to fast, but also will need to be competitive late in the race. Tatsumi Eiji STI general director said, “Last season, we appeal to speed, etc. to win 5 times the pole position, but this season is considered to be to exert the stable performance even stint late rather than the fastest time is important.”

The Subaru BRZ GT300 completed the two-day test “with flying colors,” but it still has more testing by the the team and drivers before it will be ready on April 5 for the qualifying. The car will be taken to Fuji Motor Speedway in Japan next week for more testing as they continue to work on the cars driving dynamics.

Last season was disappointing as the 2013 Subaru BRZ GT300 race car snatched pole position five times in eight races and achieved a class win, but failed in the final race. This year’s BRZ GT300 has been upgraded from last years model by Subaru Technica International (STI) who led the development of the car.

The car will be ready to participate in every race series with the intention to win it all. The car will fly and will have an experienced pilot Kota Sasaki behind the wheel. First time, SUPER GT driver Takuhito Iguchi will also be ready to go. Eiji Tatsumi will be in charge of the STI team and racing operations. The new 2014 Subaru BRZ GT300 race car has just completed its first official test. Can the race car win the championship this season? Stay tuned to Torque News for all your Subaru STI racing news.