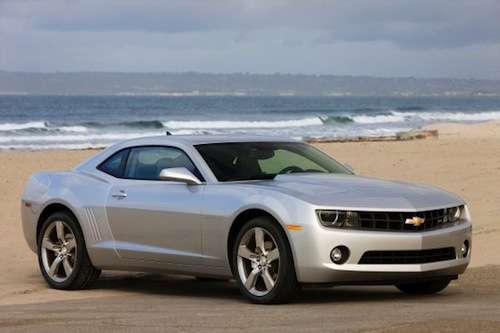 The Chevrolet Camaro outsells the Ford Mustang again to retain the top spot in the 2012 muscle car sales race.
Advertisement

In the 2012 muscle car sales race, the Chevrolet Camaro has come out on top again beating the Ford Mustang for the third straight year. Even though GM’s 2012 Camaro sales were down 4.4 percent year-over-year, it was still enough to gain the edge over the Mustang for 2012. Data from both automakers confirm that the Camaro sold 84,391 units and edged the Ford Mustang, which sold 82,995 units during the same time period last year.

Last year the Camaro blew away its competitor Ford Mustang by selling over 18,000 units more in 2011. But the Ford Mustang is gaining ground and it was a much closer race in 2012. But this marks the third straight year where the Camaro has come out on top in the pony car sales race since 2010 when Chevrolet introduced the fifth-generation retro-looking Camaro. But that could change for the 2013 model sales race.

The 2013 Camaro offers a choice of coupe V6 with 323 horsepower and convertible V6 and at the same time getting 30 mpg highway fuel mileage. It has a starting MSRP of $23,345 with the convertible starting at $30,660. It also is available with a 426 horsepower V8 that comes on the SS model. It comes mated to a six-speed standard or an available Hydra-Matic 6L90 automatic.

The base V6 Mustang comes attractively priced at $22,200 and features a first-ever 305 horsepower 31 mpg powerplant with a standard six-speed transmission. The V6 base model can also be ordered as a convertible for under $28,000. A bump up to the Mustang GT ($30,750) gets buyers a 5.0-liter V8 engine which pumps out 420 horsepower.

The GT Premium ($34,750) gets buyers an extra level of comfort and extra technology. The GT Convertible ($35,750) offers top down fun with a level of performance that is unmatched by domestic brands. Performance enthusiasts can order the Mustang Boss 302 ($42,200) and is road-race ready for those wanting extra performance. A Boss 302 5.0-liter V8 engine producing 444 horsepower comes packed under the hood.

Dodge doesn’t even come close in the sales race with the Dodge Challenger only selling 43,110 units in 2012. It looks like it will be a two car race again in 2013. The new Chevrolet Camaro still holds the crown of the best-selling muscle car in America, but it looks like Ford may be ready to take the top honors for 2013. Any bets as to whether 2013 will mark a four-peat for the Camaro?

Elon Makes a Cybertruck Statement With an Action, But Quiet in Words
Tesla's Record Month in China: Doubled Registrations in March 2021
END_OF_DOCUMENT_TOKEN_TO_BE_REPLACED