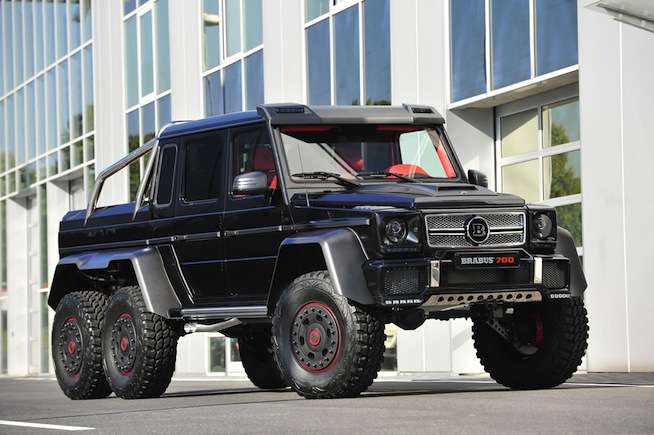 Brabus introduced the B63S-700 at Frankfurt IAA and turns the 2013 Mercedes G63 AMG 6X6 into an ultra-performance beast.
Advertisement

Brabus is to AMG what AMG is to Mercedes-Benz. They take high-performance cars and make them insanely fast. Brabus is the ultimate Mercedes tuner. They showed up at the 2013 Frankfurt Motor Show with one of the most incredible machines on the planet. They took the already exclusive 2013 Mercedes-Benz G63 AMG 6X6 and gave it even more power and performance. It’s called the Brabus B63S-700.

Brabus is a high-end tuner from Germany that specializes in Mercedes-Benz and Mercedes-AMG vehicles turning them into supercars. And they have been doing it since 1977 and have satisfied customers in over 106 countries. We can see why they have been so successful after seeing what they did to the G63 AMG 6X6.

Special high-performance metal catalysts with 75-mm (2.9 in.) downpipes are installed to lower the back pressure. It also gets a sport exhaust system with controlled butterfly valve was custom-developed for the G 63 6×6 AMG and offers both optimized power yield and active control of the exhaust note.

The computer is tweaked and Brabus uses a specially calibrated mapping for the engine management system that coordinates the interaction of the high-performance engine components. The B63S-700 even complies with current global emission laws and the stringent EURO V emission standards.

The Brabus B63S-700 takes the 2013 Mercedes-Benz G63 AMG 6X6 and turns it into the ultimate high-performance off-road beast. It just made its worlds debut at the 2013 Frankfurt Auto Show and Brabus will upgrade any current Mercedes-Benz 63 AMG SUVs.

Stay tuned to Torque News for all the latest Mercedes-Benz and Mercedes-AMG news.