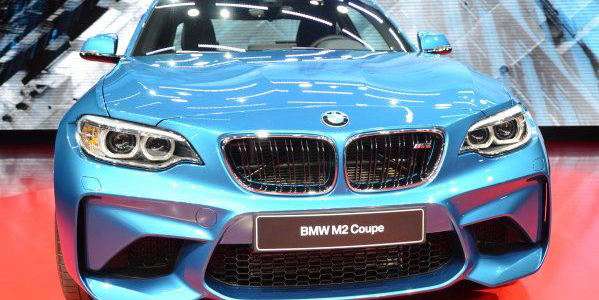 The new BMW M2 Coupe is already in dealer showrooms and it’s been a big success before it’s official launch.
Advertisement

When BMW announced the M2 Coupe’s launch last year, they had no idea how hot the performance coupe would be around the globe. It hasn’t even made its dealer launch and it’s already sold out in some global markets. It’s arriving already in Europe. It was announced by BMW that the new 2016 M2 Coupe would begin arriving in April, but the performance cars are already in dealer showrooms in late January. An M2 has been video taped in a Luxembourg dealer’s showroom. Thanks to BimmerPost, this Alpine White M2 was shot inside the dealer’s display area and can be seen in the video below.

The M2’s launch is creating excitement all over the globe

The new M2 Coupe’s launch is creating excitement all over the globe not just in European showrooms. The performance car just made it’s global debut at the Detroit Auto Show and performance enthusiasts in the U.S. can’t wait for the coupe to arrive. The 2016 BMW M2 could be the hottest launch for BMW M ever. It’s going to be a sought-after car with performance enthusiasts all over the globe. From Europe to the U.S. to Australia to the Middle East, performance fans are lining up to get their hands on the newest M machine.

It’s been reported by The Motor Report, in Australia, the new M2 Coupe is set to launch in April, yet the car is already being ordered at a rate that may see the first year's allocation totally sold out before the car even makes it to dealer showrooms. At a recent BMW brand event, BMW Australia Managing Director Marc Werner told TMR, "We have significant pre-orders. We can’t talk absolute numbers here, but for the first year we will be almost completely sold out.”

At the Qatar Motor Show 2016, Alfardan Automobiles, official BMW Group importer in Qatar, hosted the Middle East debut of the all-new BMW M2 Coupe yesterday. It was a huge hit with the press and they expect the new coupe to be a hot launch in the Middle East. While it’s too early to tell, it may outsell BMW’s M4 which has been wildly popular in this region of the world.

The new 2016 BMW M2 Coupe will possibly be the brand’s biggest conquest vehicle in 2016. Will it take buyers away from less expensive hot hatches like the Mercedes-Benz AMG A45 and Audi’s RS3? Stay tuned.

John pellew wrote on March 22, 2016 - 2:02pm Permalink
I have ordered one in long beach blue ordered last Oct can't wait to get it I live in South wales