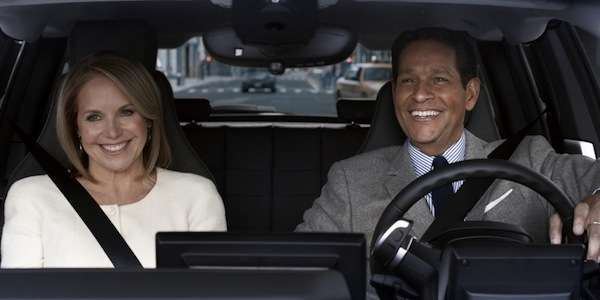 BMW releases i3 Super Bowl ad before the big game. Watch Katie Couric and Bryant Gumbel in a famous 1994 Today Show clip initial confusion surrounding “what is the internet?”
Advertisement

If you were watching the Today Show back in 1994, you saw Katie Couric and Bryant Gumbel talking about this new thing called the internet. BMW has taken a clip of the now famous 1994 Today Show and the initial confusion surrounding “what is the internet?” They have coupled the clip with Couric and Gumbel driving the new BMW i3 and talking now about this newfangled concept called i3. Check out the 60 second spot before the Super Bowl.

BMW did not say how much they had to pay the duo of Gumbel and Couric, but by the look of those big smiles, they likely were paid well. “The BMW i3 Super Bowl spot is my very first commercial, and the opportunity to reunite with Katie was a no-brainer,” said Bryant Gumbel. “We are not actors, and we got to be ourselves, which made it fun and easy.”

MUST SEE: Valet takes customers BMW M4 for a joy ride in parking garage and then gets fired [video]

BMW is hoping to shed new light on the new i3 which is similar to how the internet was viewed 21 years ago. “In 1994, people had not yet grasped what the internet was, which is similar to how electric mobility is viewed today,” said Trudy Hardy, Vice President of Marketing, BMW of North America. “Electric mobility is at a tipping point. We are on the verge of something great and we hope that with this spot, we can educate audiences about the BMW i3 and e-mobility in a fun and engaging way.”

BMW will air the “Newfangled Idea” ad 21 years later, after the “what is the internet?” Today Show, during the prime first quarter of NBC’s broadcast of Super Bowl XLIX this Sunday, February 1. 30 seconds of air will cost an average $4.5 million dollars so this 60 second spot will cost BMW 9 million plus what they paid Couric and Gumbel to bring attention to their new all-electric i3. It should be money well spent as 111.5 million people watched the Super Bowl last year, and most of those were there to watch the new commercials.