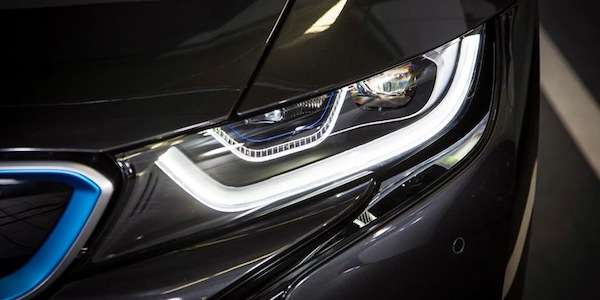 BMW i8 Laserlight technology gets upstaged by new OLEDs

BMW presents a concept vehicle at CES that showcases the kind of lighting innovations we can expect in the future.
Advertisement

Technology is moving at laserlight speed and the new BMW i8 high-tech headlights are already being upstaged. BMW brings new high-tech lighting innovations that show us what we can expect to see on their cars in the near future. BMW already features this Laserlight technology that made its production car debut in the BMW i8.

What’s next for BMW’s lighting?

At the Consumer Electronics Show (CES) in Las Vegas that runs from January 6-9, BMW shows how Laserlight becomes “intelligent” thanks to connectivity. The new BMW i8 Laserlight technology, already sets benchmarks in terms of range and intensity. BMW’s i8 headlights have a range of up to 600 meters which is twice that of conventional headlights and has an intensity a thousand times greater than that of conventional LEDs.

At CES, the technology is advancing even further by being linked up with cameras, sensors and driver assistance systems, opening up the prospect of numerous new functions in the future. It’s called OLED (organic light-emitting diodes). BMW has been working on this technology for a number of years and already presented tail lights featuring OLED technology with its BMW Vision Future Luxury concept unveiled in 2014.

From the front to the rear lights

BMW says we’ll see the new laserlight technology move from the headlights to the rear tailights. With the current technology in LEDs, which are a point light source, the new OLEDs generate a uniform light across their entire surface. Because the elements are very thin, at just 1.4 millimeters in thickness, it will allow individual modules to be activated separately and BMW says it “opens up new possibilities for the design of rear lights.”

When will we see the new OLEDs?

The new BMW i8 is the world’s first series-produced vehicle to be available as an option with innovative laser headlights, but you won’t see the new headlights here in the U.S. because BMW says they "currently do not comply with U.S. regulations." We aren’t sure whether these U.S. regs will allow the tailights to be used here either. So while this new lighting technology is advancing fast, it’s slow to be accepted in the U.S. market. Stay tuned.