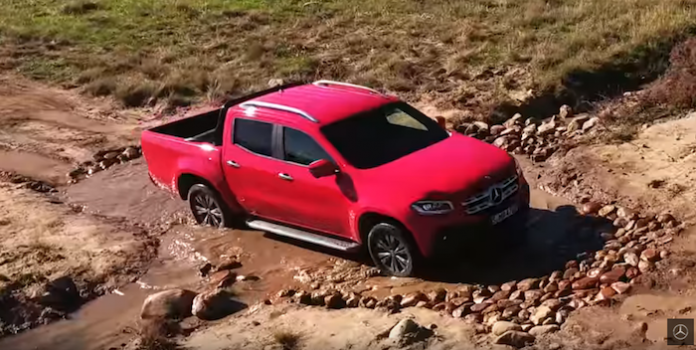 BMW Calls Mercedes X-Class “Appalling”; Now They May Build One

Everyone wants to get into the midsize truck market because it’s so hot. Now BMW may build one of their own performance-oriented trucks to compete with the new Mercedes-Benz X-Class. They even took a few shoots at the Mercedes pickup calling it an awful truck.

A senior BMW executive has described the new X-Class luxury pickup as “appalling” in an interview with Motoring. When you look up the definition, it bring it more into light at what the Bavarian automaker thinks of the X-Class. Appalling means bad, dreadful, awful, terrible, frightful, atrocious, disgraceful, deplorable, and hopeless. Not a good first impression, right?

At the Frankfurt Motor Show, Hendrik von Kunheim, BMW’s senior vice president in charge of Asia, South Africa and Australia, went on to tell the Australian website, “When you look now at our German competitor from Stuttgart I think that product (X-Class) is appalling. You would have expected something more serious. I saw that car (X-Class) in Geneva and was actually disappointed. Very disappointed.”

Hendrik von Kunheim says the German automaker may be planning a mid-size pickup of their own to compete with the Mercedes-Benz X-Class. He did not indicate when it would arrive, but said there’s a good possibility it could make it to production. But it’s not as easy as just coming up with a new pickup.

Mercedes-Benz needed Nissan in order to more quickly expand its commercial truck division into the growing global pickup markets. Mercedes-Benz chose Nissan over Toyota and Honda who make the Tacoma and Ridgeline because of Nissan’s global manufacturing abilities. The X-Class will be built alongside the Navara and sister model, the Renault Alaskan in Spain and Argentina.

We’ve even heard Nissan will help partner Mitsubishi develop a new mid-size pickup of their own. Mitsubishi is picking Nissan’s pocket and could rebadge the all-new 2019 Frontier with the “Raider” nameplate. Reports say the new Mitsubishi Raider will be launched in 2020 or 2021 after the Frontier has time to breathe and it won’t upset Nissan dealers. It could also get the new-generation Nissan V6 engine under the hood of the new pickup.

On the other side of the pond, BMW may be building a new truck of their own and of course they think they can do it better than their German rival Mercedes-Benz. They’ve called it “appalling” and says the new X-Class is “Is a big disappointment.” Now they just need to figure out who will help them build their own performance-oriented truck. Stay tuned.

Dups wrote on March 19, 2018 - 2:05pm Permalink
I thought this truck is based on a Nissan chassis. They will have long ways before they match the Toyota Tacoma for capability and reliability.