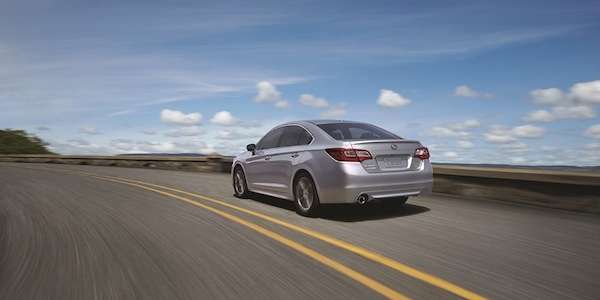 Cars.com, the premier online resource for car buying listed the most affordable midsize sedans currently for sale. Where does 2015 Subaru Legacy rank?
Advertisement

Cars.com wanted to know what the most affordable midsize sedans in America are and came up with a list. To make the list, each car had to come standard with the a few features that today's shoppers expect in a sedan and included automatic transmission, power driver's seat, rearview camera, Bluetooth and an USB port. The 2015 Subaru Legacy also comes standard with all-wheel-drive while the others don’t.

Just because a new car has a low sticker price or great fuel economy doesn't mean it's the most affordable one for consumers. The criteria Cars.com used combines the cost to purchase the car and factors in five years of fuel costs as well as each car's residual value after five years.

Dave Thomas, Cars.com managing editor says, "We know that most consumers focus on price when shopping for a car, so we've taken a look at long-term cost instead of simply the cost of each car to help shoppers understand which one will save them the most money over time.”

The final figure takes the 5-year fuel cost plus the price as equipped minus the residual value equalling the final cost.

The all-new 2015 Subaru Legacy sedan is one of the few all-wheel-drive midsize sedans still available in the U.S., and it's even the third most affordable midsize sedan in America. The 2015 Subaru Legacy 2.5i starts at $22,490 including destination and features a standard Lineartronic CVT automatic. For 2015, Legacy brings a fresh exterior and interior design, more technology, and improved fuel economy to the all-wheel-drive sedan.

The new-generation 2015 Subaru Legacy sedan gives buyers confidence because of features that other popular models don’t have. None of the other top sedans in this segment like Honda Accord LX, Ford Fusion SE, VW Passat SE, Hyundai Sonata SE or Mazda6 Touring offers all-wheel drive. The 2015 Legacy 2.5i Premium base model does. This is where the new 2015 Legacy sedan...read more.

According to Cars.com, the 2015 Subaru Legacy is the third most affordable midsize sedan in America. What sets it apart even further is its all-wheel-drive all-weather capability.

LG's New EV Battery Plant Is a Welcome News for Tesla
Tesla Giga Berlin's New Hurdle: It's Not Only the Gov't, but Now Tesla Itself
END_OF_DOCUMENT_TOKEN_TO_BE_REPLACED