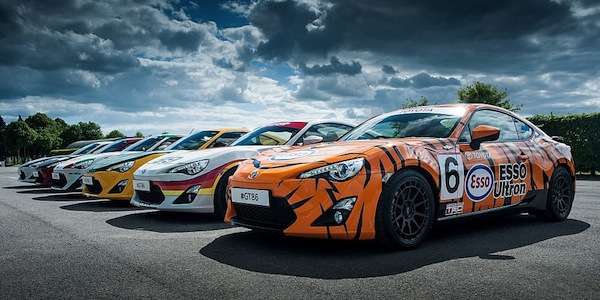 Toyota will give special recognition to their motorsport heritage with six GT86 models at the Goodwood Festival of Speed. Will they make it to production?
Advertisement

Toyota is paying a special tribute to their motorsport heritage with the GT86 sports coupe. The GT86 derives its name from Toyota’s sports car heritage and it comes from the 2000GT and Corolla AE86. Now, a fleet of six GT86 sports cars will get classic liveries and retro styling details that will honor more of Toyota’s race and rally cars of the past 50 years. These special coupes are one-off examples and will not be for sale.

Fans can drive the cars

The 6 GT86 coupes will make their debut at the Goodwood Festival of Speed on June 25. Motorsport fans can test drive the six two-door sport coupes on a course that includes Goodwood’s famous hill climb. Toyota says the cars will be on display for the remainder of the festival at the Goodwood racing circuit, for the popular GT86 Drift Experience.

Each example inspired by a Toyota race car

The other three will honor the IMSA GTU Celica that raced in North America in the 1980s, the World Rally Championship Celica GT-Four and the Esso Ultron Tiger Supra from the All-Japan Grand Touring Car Championship.

The liveries were produced by Motor Mode from key elements of the original liveries in the right proportions for the Toyota GT86. The ride height on each sports car has been lowered by 40mm with new springs and the retro look of the cars is finished off with special wheels from Rota. Underneath, each GT86 gets a Milltek Sport stainless steel exhaust system.

If you are going to the Goodwood Festival of Speed, check out and drive the six new Toyota GT86 models that give special recognition to the brands motorsport heritage.

Toyota's First EV Will Have a Name of BZ: Toyota BZ
First Videos From Inside The Boring Company's Las Vegas Loop
END_OF_DOCUMENT_TOKEN_TO_BE_REPLACED