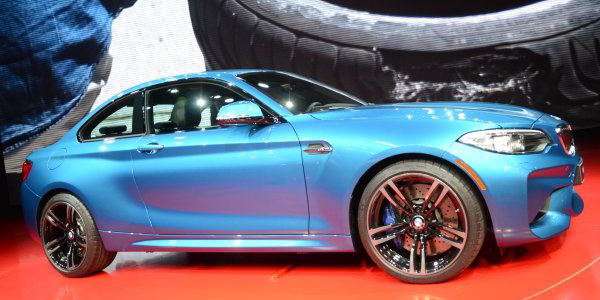 The BMW M2 just made its global debut in Detroit and it will be a key M model for the brand. Why is BMW M GmbH experiencing such tremendous success?
Advertisement

It’s called momentum in sports and when it happens it’s easier to keep it rolling than to get it started. You’ve seen it happen in sports where a team gets rolling and there’s no stopping them. That’s what BMW is experiencing in their performance M division. The new BMW M2 just made its global debut at the North American International Auto Show in Detroit and it will be a key M model for the Bavarian automaker. BMW has the momentum going right now and the new 2016 M2 will keep it rolling.

BMW is starting off 2016, their centenary year, in big way with the M2 Coupe. It’s why the performance M division will keep the momentum going and they will remain a key part of the brands success for years to come. The M3 is still a great vehicle, but BMW goes back to their roots with the M2 Coupe. The M3 has grown bigger over the years opening the door for a new M model that captured the spirit of the original. Enter the M2.

BMW says the M2 is the legitimate successor to the BMW 1 Series M Coupe and it carries on the tradition of a compact, high-performance sports car that started with the 2002 turbo. It comes with five features that will keep the momentum going for BMW M GmbH for years to come.

The M2 gets a bold design and it will never be mistaken for a standard 2 Series. The appearance from the front and back give it a musclebound stance that says this car is as fast as it looks. The new 3.0-liter inline six-cylinder engine is a powerful example of what M engineers needed to stuff under the hood. The 365 bhp coupe will launch the M2 from 0-60 in 4.2 seconds according to BMW. BMW has a tendency to underrate which suggests the M2 could be even quicker. Add in a few aftermarket upgrades, which will be available soon, and the M2 will be unbeatable.

M2 has everything it needs

The M2 is a rear-drive performance car that still comes with a 6-speed manual gearbox, a rarity among many modern performance cars. The M2 is lightweight enough and benefits from the M3’s use of aluminum and carbon fiber material throughout. It’s got everything it needs to be one of the most successful cars the M division has ever launched.

The 2016 BMW M2 has what it takes, bold styling, impressive performance, a manual gearbox, it’s lightweight and it gets back to the tradition of a compact, high-performance sports car. When the M2 makes its dealer launch in April, it will likely be a huge success and keep BMW M’s momentum going in 2016. BMW will be attracting a new generation of performance enthusiasts who won’t have a problem shelling out $52,695 including destination for this sports car. Look for BMW M to have another big year.