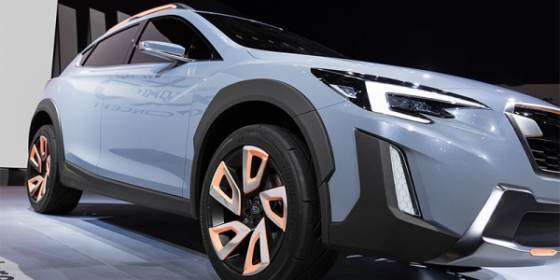 The Subaru Crosstrek is the next vehicle in the lineup to get a complete makeover. What’s coming?
Advertisement

The next-generation 2018 Subaru Crosstrek is getting a complete makeover. Here’s five things to look for when it arrives. The new-generation Crosstrek will likely grow slightly longer and wider than the current model. Since Crosstrek rides on the same architecture as Impreza, it’s wheelbase grew by an inch to 105.1 inches. Since both sedan and the five-door hatchback Impreza models are 1.6 inches longer, 1.5 inches wider than the current car, the Crosstrek should also see similar outside dimensions.

Consumers will see noticeable changes in the new Crosstrek’s driving dynamics because it will ride on the new Subaru Global Platform. In a nutshell, the new underpinnings will reduce vibrations and produce a smoother ride quality. The body and chassis will be 70-100 percent more rigid which will translate to improved steering response, and the increased rigidity of the suspension mounting will reduce body roll by 50 percent compared to current models like we see in the new Impreza.

The Crosstrek crossover will also have a lower center of gravity improving driving dynamics in the corners producing a more dynamic ride. Subaru says the new global platform underpinning the next-generation models improves crash energy absorption by 40 percent over present models. Expect the same in the 2018 Subaru Crosstrek.

The Crosstrek also gets new engine technology. The new model will be powered by the new-generation 2.0-liter direct-injection boxer engine. Subaru says 80 percent of the parts in the new 2.0-liter are new and have been revised over the old powerplant.

Also look for an updated Continuously Variable Transmission (CVT) in the new Crosstrek. Subaru says engineers expanded the ratio coverage (speed range) in the automatic transmission that will improve acceleration performance and fuel economy will be improved at higher speeds. Engineers also reduced the weight of the transmission case by 7.8kg.

Lastly, the next-generation Crosstrek has been targeted by Subaru to be the first model in the lineup to get full electrification. The Crosstrek crossover is the next vehicle in Subaru’s lineup to get a complete makeover with the new Global Platform, and it will get a complete drivetrain remodel too. It will likely get a new plug-in hybrid powertrain first, and all-electric power by 2021. Look for the 2018 Subaru Crosstrek to arrive late next year.