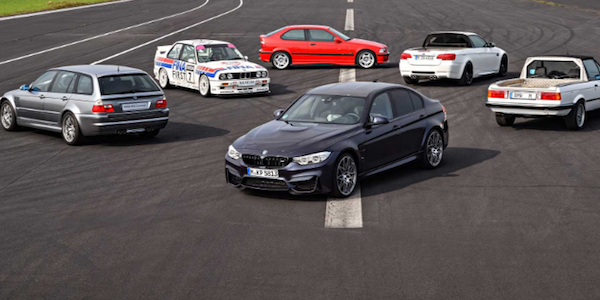 4 Strange BMW M3 Prototypes You Didn’t Know Existed, Thankfully they Never Made it to Production

Check out these 4 BMW M3 prototype models built by BMW M GmbH you probably didn’t know existed. Thankfully, they never made it to production.
Advertisement

BMW built four M3 variants that, for various reasons, never made it past the prototype stage. BMW is celebrating the 30th anniversary of the M3 performance sedan, and these four M3 “guests” will be attending their progenitor’s birthday party. Check them out. Thankfully, they never made it to production.

You’ve likely never heard of these 4 models unless you are a BMW M3 enthusiast. They actually made it to the prototype stage, and for various reasons, BMW never produced a production model and brought them to market. What are they? The BMW M3 Pickup from 1986, the BMW M3 Compact from 1996, the BMW M3 Touring from 2000 and the second incarnation of the BMW M3 Pickup unveiled in 2011.

BMW’s Motorsport department got excited about the prospects of building an M3 that could be used to transport work equipment and parts around the premises of what is now BMW M Division in Garching near Munich. The only problem was that goods transport didn’t figure very highly on the list of the first BMW M3’s many talents. They wouldn’t have sold many to performance enthusiasts.

The idea behind this prototype was to present younger customers an entry point into the world of BMW M cars. “To a certain extent, the M3 Compact can be regarded as the forefather of today’s BMW M2,” remarks the BMW M workshop chief. If it had gone into production, the M3 engine’s power would in all likelihood have been lowered somewhat.

The BMW M3 Touring prototype likewise materialized because a production model was under consideration. The M3 Compact was made available to journalists for testing in order to both project an image and sound out customer interest. We are sure customer interest in the wagon was low. The M3 Touring actually served entirely in-house purposes. Engineers wanted to see if they could make the rear door doors fit within the rear wheel arches without the need for new and expensive tools. And they could.

BMW needed another pickup to transport parts aft the first pickup was worn out. Someone within BMW came up with the idea of marketing the vehicle as an April Fools’ joke, as April 1 was just around the corner. BMW’s Jakob Polschak recounts, “To prime the public, spy shots of calibration runs on the Nurburgring’s Nordschleife circuit emerged in the run-up to the day, which served to fuel speculation about plans to build a production model.” Thankfully, this BMW M3 prototype pickup never made it to production.