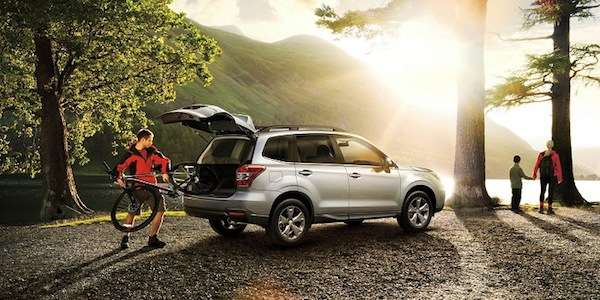 The 2015 Subaru Forester is Australia’s Wheels magazine Megatest winner. Why did the Forester win?
Advertisement

The 2015 Subaru Forester just continues to rack up global awards and gets another big accolade from Australia. For the second time in a month, Subaru’s 2015 Forester has beaten nine major small SUV competitors to win a “Megatest” comparison, this time in the August edition of Australia’s Wheels Magazine. What was this test about?

The 2015 Subaru Forester received all the praise from the magazine who conducted the testing of all ten small SUVs. The Subaru Forester seemed to surprise the editors of the Australian magazine, and they didn’t expect the Subaru to win the competition. Wheels says: “At the beginning of this exhaustive test, no one guessed that Subaru’s Forester would be standing on the podium, let alone in the gold medal position.”

Forester is among the least expensive

The Forester comes with lots of standard features, and was still one of the least expensive small SUVs among the competition. Wheels Magazine went on to say, “And then there’s Forester’s price. At $35,990 (Australian), the 2.5i-L is one of the least expensive SUVs here, yet it still scores a reversing camera, dual-zone climate, 17-inch alloys, privacy glass, and handy little sunvisor extenders."

One thing Subaru has done well is to stay true to their core values over the years. At a time when many automakers are designing SUVs that look like sport coupes, Subaru bucks the trend and gives buyers what they want. Those core values include good visibility, cargo carrying ability and versatility. The secret to Subaru’s success is that they stick to the basics and then they keep improving on them every year. Wheels concluded by saying, “But here lies a textbook example of how to do things well, some things exceedingly well, and almost nothing badly.”

There is another core value that keeps the Forester on the top of the list. The Subaru brand has continued to develop and improve on their excellent Symmetrical all-wheel-drive throughout their entire lineup with the exception of the BRZ sports car. Consumers have come to know Subaru as an expert in all-wheel-drive technology.

The 2015 Subaru Forester beats all the competition and wins another award from down under. The same Forester variant also rated first among 10 compact Sports Utility Vehicles in a mega-comparison test published in the July edition of 4x4 Australia magazine. Wheels Magazine concludes, “Forester maintains its value-for-money appeal right to the top. And that’s exactly where it finishes.”