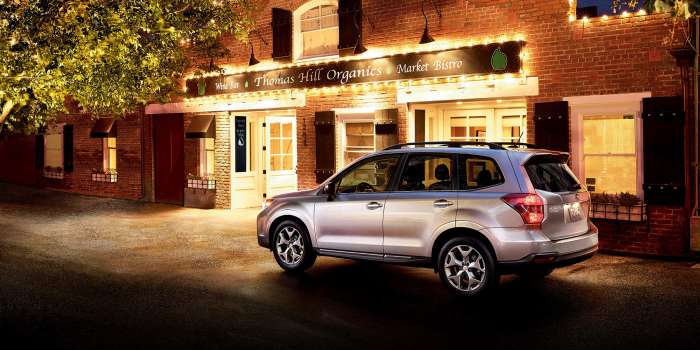 Subaru of America has best-ever sales month and the new-generation 2015 Forester leads the way. Why is Forester so popular?
Advertisement

Two years ago, the Subaru Forester was outdated and few people wanted to buy the compact SUV. But now, the new-generation 2015 Subaru Forester leads Subaru of America to see its best-ever sales month in August. That’s quite a quick turn around for the small SUV. The new model is Subaru’s number one selling multi-use vehicle in their lineup even ahead of the popular Outback wagon.

Subaru of America reports that the 2015 Forester saw a whopping 42.85 percent increase YTD over the the previous years sales. That leads all the other models in Subaru’s lineup. It also outsold all the other models in the month of August and beats out the Outback which has been the number one seller in the stable for Subaru. Additionally, August saw the best month ever for the Subaru Forester.

What did Subaru do right with Forester to make it the top seller?

The 2015 Forester gets eight new standard features for the new model year and buyers with active lifestyles are being drawn to the compact SUV. It gets new standard features across the lineup. For 2015, the base model 2.5i gets rear vision camera and color multi-function display as standard equipment. The 2.0XT Premium now features a standard All Weather Package.

It may not seem like a big deal, but Subaru caters to dog owners and the dogs and their owners love it. Subaru is stepping up in a big way and actually helps fund the research that will go into testing of pet car safety restraints. They partner with The Center for Pet Safety that is a registered 501(c)(3) non-profit research and advocacy organization dedicated to companion animal and consumer safety. Currently, there are no performance standards or test protocols in the U.S. for pet travel products. But Subaru and The Center for Pet Safety plan on changing that. The Forester has an ideal rear cargo area for dogs and buyers like the multi-purpose options.

Forester works for an active generation

The new 2014 Forester is number one in the U.S. market, but Forester is a global vehicle. The new-generation SUV gets X Mode that allows owners in North America, Europe, Eurasia and Australia to go through some extreme conditions and have some extreme fun. With a flip of a switch, X Mode is available and the fun begins.

On typical SUVs, torque is not distributed evenly to all four wheels and one or more wheels can begin to slip and the vehicle can lose traction and get stuck in the snow or mud. But 2015 Forester’s X Mode will allow any driver regardless of skill level, to escape any extreme situation they may encounter.

Forester has received numerous accolades which consumers pay attention to. Forester won the Sport/Utility of the Year award from Motor Trend, named Best SUV in the Yahoo Autos Car of the Year awards and took home the Best Bet award in the Small SUV category in Consumer Reports Best Bet list.

Subaru of America has its best-ever sales month in August, and the new-generation 2015 Subaru Forester leads the charge. August saw the best month ever for the Subaru Forester. Subaru has hit a home run with the compact SUV.