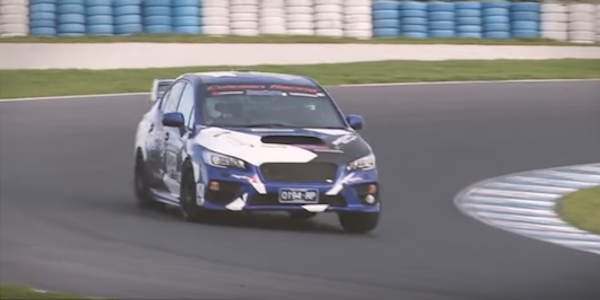 The 2017 Subaru WRX STI is a rally-bred performance car. What about taking it out on the tarmac?
Advertisement

Everyone knows the success the Subaru WRX STI has had on the rally stages, but what about on the track? Subaru is on the verge of winning its sixth championship in-a-row in the WRX STI rally car driven by David Higgins. What about getting the STI out of the dirt and onto the tarmac?

That’s what Brent Coleman did from Australia on a track at the recent SubiNats held at Phillip Island, an Australian island about 140 km (87 mi) southeast of Melbourne, Victoria. He drove a Tarmac rally Subaru STI and recorded consistent quick times at the event.

He proved you don’t even need to bump up the power in the WRX STI to have a quick track car. His 2015 Subaru WRX STI is basically a stock factory version with a few changes made for the tarmac. Subaru Australia offered these STI NR4 rally-spec, imported from Japan, specifically for motorsport enthusiasts for rally racing. They come with the JDM 2.0-liter turbo boxer engine producing 261 horsepower at the wheels.

These NR4 WRX STIs were originally sold to be rally cars and not street registered. However these cars are basically the same as the road going version just with additional safety upgrades. The only modifications made to the STI were a Plug-in Emtron ECU, Trackart Rally-Spec roll cage, MCA Gold suspension and AP six-piston brakes.

Your new-generation WRX STI comes with a 305hp 2.5-liter boxer turbo engine, Subaru’s Symmetrical All-Wheel Drive and race-tuned suspension. Sure there are more powerful performance vehicles on the market, but who can challenge the WRX STI in the corners, tarmac and race environment?

In stock form, without any modifications, the Subaru WRX STI all-wheel-drive performance car can take on an environment that has extremes of wet, dry and loose dirt and the driver has complete confidence in the cars abilities. The new generation Subaru WRX STI is engineered to perform on the track.

The few changes were enough, along with Brent's great driving, to see the STI finish in fourth place in the GT4 class at this year’s Targa Tasmania. With a few safety modifications, you could take your stock Subaru WRX STI to the tarmac and win now. If you do, don’t blow out a tire.