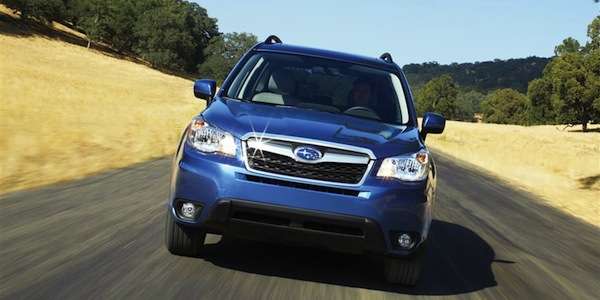 Subaru’s 2016 Forester is a safe vehicle for humans to ride in, now Subaru wants your pet safe too. What is Subaru doing about pet safety in your car?
Advertisement

Subaru and the Center for Pet Safety (CPS) formed a partnership to protect our furry friends. Subaru has a goal to be the overall safety leader with vehicles like the new 2016 Forester. Now they want your family pet safe too. CPS’s recent study highlights 3 kennels and crates to transport dogs that are the top pet safety products on the market.

Subaru says, “The top performers surpassed all competing products in the CPS-designed studies, which included testing of crate connections and rigorous crash testing to examine crate and carrier structural integrity.”

Because there are currently no test protocols or performance standards in the U.S. for animal carriers, CPS gathered data in their studies to determine the safest products on the market. CPS will uses the tests to come up with much needed crate and carrier testing and performance standards.

How to keep your pet safe in the car

If an animal is riding in a vehicle like the Forester SUV, in the event of a crash, it’s critical that pet crates and carriers contain the dog and prevent the animal from becoming a projectile in the vehicle. It’s also important the containment device be secured within the vehicle. If its not, the dog and crate can potentially strike and injure a human passenger.

Subaru says, it’s also imperative that pet owners secure crates and carriers for travel using strength-rated cargo area anchor straps and not elastic or rubber bungee cords. These are available at your local hardware store. The 2016 Subaru Forester offers cargo-area grocery back and tie-down hooks as standard and these can be used to secure the dog kennels and crates inside the vehicle.

“We at Subaru recognize the importance of keeping the entire family safe on the road, including our beloved pets,” said Michael McHale, Subaru's director of corporate communications. The 2016 Subaru Forester achieved a top safety rating and gets new safety features for keeping all members of the family safe including your pets. Now they have the top-rated recommended carries and crates too.