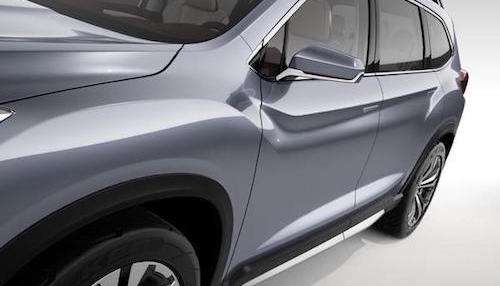 Subaru learned three valuable lessons from the discontinued B9 Tribeca they will change with the new 3-Row Ascent. Will Americans buy it?
Advertisement

Subaru of America won’t make the same mistakes with the new 3-Row Ascent Crossover they made with the discontinued B9 Tribeca. Subaru learned three valuable lessons from the Tribeca as Americans won't buy the same vehicles as consumers around the globe. Subaru Corporation is designing the Ascent for American families and it won’t be sold anywhere else. U.S. buyers want big, comfortable and powerful when it comes to their SUVs which Tribeca was not.

What was wrong with Tribeca?

Tom Doll, COO of Subaru of America (SOA) told Automotive News recently they know they made mistakes and they aren’t about to repeat them with American SUV consumers. He said the Tribeca was too small, it was underpowered, and it’s styling was too different from the rest of the Subaru lineup.

The new 3-Row Ascent will be very different from the discounted Tribeca and they expect it to be a game-changer. It will feature all-wheel-drive as standard equipment, but that will be the only similarity. Doll told AN the new Ascent will look a lot like the three most-popular vehicles that are their lineup. It will resemble its stablemates, the top-selling Outback wagon, Forester SUV and Crosstrek crossover. Doll says, “It's got the family resemblance, in a good way.”

The other lesson SOA learned is the new Ascent will be much bigger and will be a true 3-Row vehicle for families in America. It will be a 7-seat crossover and the interior will be more upscale than the Tribeca. When Subaru brought the Ascent Concept to the New York International Auto Show earlier this year, it was unveiled with bigger exterior dimensions and interior volume was increased considerably from Tribeca.

The new 2018 Subaru Ascent won’t be underpowered like the smaller Tribeca. The new 3-Row vehicle will be powered with an all-new turbocharged fuel-efficient Direct Injection Boxer engine. Subaru has not revealed the exact size of the new powerplant, but it will be a new engine specifically built for the Ascent.

Subaru enters a new segment for the brand

Subaru is expecting some current Outback customers to move up in size, but the majority of Ascent buyers will be conquests from other brands like the Toyota Highlander, Ford Explorer, Chevy Traverse, Dodge Durango and Jeep Grand Cherokee. The new 3-Row Ascent allows Subaru to enter a whole new segment the’ve been missing until now. It also allows their current customer base of young millennial families to move up in size as their family grows.

Doll says Subaru dealers are more than excited about the new Ascent. He says, “This helps us in a lot of different areas. It helps us with legitimizing us in that three-row segment. And it's a beautiful execution.” Go to Page 2.

This will be the first new vehicle from Subaru since they launched the Crosstrek crossover in 2012. Subaru of America learned their lesson with the smaller Tribeca that was too small, underpowered and it didn’t have the family resemblance and they won’t make those mistakes again. The new seven-passenger Ascent production vehicle will be larger and designed for families with active lifestyles. The new 2018 Subaru Ascent will expand the brand’s lineup to include a true seven-seat SUV they bring to dealerships in 2018, Stay tuned.

John wrote on June 8, 2017 - 12:59pm Permalink
Take My Money!!... Please since it's going to be a 4cyl. make it at least a 2.5L with at minimum 285 hp. Of course a turbo would be much appreciated!! Thx for the article.
Matthew wrote on March 28, 2018 - 2:11pm Permalink
"The new 3-Row Ascent will be very different from the discounted Tribeca" but is it very different from the Tribeca without a discount?
Bill wrote on August 4, 2018 - 11:15am Permalink
Our Tribeca has a 3.6 making like 260 hp. Never feels underpowered. Not sure why this article says that. Now the 2.5 outback is somewhat underpowered I might agree.
William wrote on August 4, 2018 - 11:17am Permalink
The 3.6 Tribeca does not feel underpowered like this article says.
Michelle wrote on May 9, 2019 - 8:19am Permalink
I have a 2011 Subaru Tribeca and it is amazing. My family an I love it. Good for travel and all. I do not know what was the actual problem with discontinuing this vehicle, but I’m thinking they should have continued making them
sheila wrote on July 9, 2019 - 2:34pm Permalink
I like the outside and especially the inside styling of the tribeca. I like it because it is so different. I'm a fan of subaru but not of the ascent. tribeca doesn't lack power to me, fits my family and can still haul stuff but the ascent, its like a pilot or something, nice but nothing unique in my opinion.
Felipe Gonçalve... wrote on November 10, 2019 - 10:15pm Permalink
I’m from Brazil. The 3.6 Tribeca does not feel underpowered like this article says... I have one and love this car!!! My family loves too! Power, comfortable and thrust worth.I think Subaru needs to continue the name “Tribeca” and the vehicle generation... all Brazilians love Subaru Tribeca.
Felipe G. wrote on November 10, 2019 - 10:17pm Permalink
My family loves the Subaru Tribeca! This is the best vehicle, trustworthy and comfortable. Brazil here!
Andre S wrote on November 27, 2019 - 4:46pm Permalink
I've had a 2006 B9 since new. I am NOT exaggerating when I say the car saved my butt several times, when I went from sunny pavement to shaded black ice in Oregon on a number of occasions. People around us were wrapped around trees or wheels up in a ditch and we never even lost traction: on summer tires! I was in denial about the lousy mileage (usually 220 to 240 miles per tank), or the fact that I smelled smoke when we were towing a small trailer uphill but what really baked my noodle was a blown headgasket and broken transmission valve body around 160K miles. The repairs exceeded the value of the car. I still have it but that was a damn shame, and the mechs said it happens to these cars all the time. Damn shame. That motor is too flimsy, and torques itself into oblivion on first overheat. I wish I could repower it; I'd keep it forever!
Robson Braga wrote on September 3, 2020 - 1:10pm Permalink
The Tribeca was underpowered? Please. The 2008~2014 model has 256hp, without turbo charger. The ascent has 260hp with 2 turbo chargers plus GDI. Not much of a difference, except that 2 turbos and GDI will give more maintenance. It's true, the Tribeca's 3rd row is smaller, BUT, it was intended to children, not adults. The problem of the Tribeca, at least the 2008~2014 generation, it was ahead of it's time. Even today it's design is sharp.