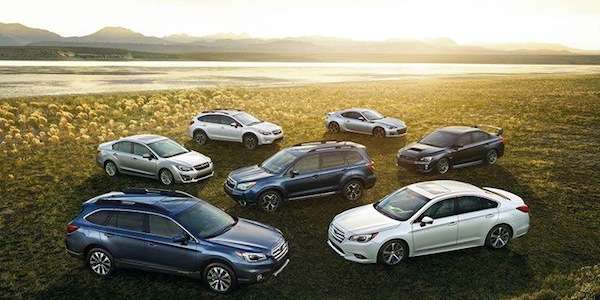 3 marvels that position Subaru head and shoulders above the competition

The Subaru brand is flying high and it looks like there is no stopping them. What are 3 things that set Subaru apart from the rest?
Advertisement

Fuji Heavy Industries (FHI) maker of 2016 Subaru Outback, Forester, XV Crosstrek, Legacy, WRX/STI, Impreza and BRZ is doing something right. Starting in 2009, Subaru of America, under the leadership of Subaru CEO Tom Doll, the small automaker took a giant leap and hasn’t looked back. What happened to Subaru and how did they create this amazing success they are having?

The last seven years for Subaru have been nothing short of amazing. Since 2009 the Japanese automaker has outperformed the market in a big way. Starting with the current year and moving back will put it all in perspective. Today, Subaru sales are up 14 percent in a U.S. market that increased just 4.4 percent. Subaru dealers are selling their new Outbacks, Foresters and XV Crosstrek all-wheel-drive vehicles about as fast as they can get them.

There are two other milestones for the Japanese automaker worth noting. In the first half of 2015, Subaru’s U.S. market share hit 3.2 percent which is a 2 percent increase over their market share back in 2007 when it was just 1.2 percent. To bring that into perspective, Nissan is the only automaker to add more share in the same period, 2.1 points, but Nissan sells 2 1/2 times as many vehicles as Subaru in the U.S.

Another measure of Subaru’s success is happening this year as FHI will more than likely triple its sales volume total from 2007, when Subaru of America sold just 187,208 vehicles. If Subaru just matches it’s 2015 first half total, it will finish the year near 545,000 vehicles sold. Subaru will likely do better than that because last year, 54 percent of Subaru's 513,693 U.S. sales occurred in the second half of the year.

In a recent interview with Autoline, Tom Doll pointed out that since 2006-2007, Subaru changed the culture and decided to do what they do best and stick with their niche market of all-wheel-drive vehicles and they do it well. Doll says, “We are special and unique and appeal to a customer looking for this technology.”

The small automaker is committed to three things that make up their core values. They are about all-wheel-drive, the boxer engine design and safety. These are non-negotiable for the Japanese automaker and they will continue to focus on these areas in the future.

The 2016 Subaru Outback, Forester, XV Crosstrek, Legacy, WRX/STI, Impreza and BRZ vehicles will stay popular with consumers in America. A new generation of buyers is driving sales as they find out about the brands functional, recreation-purposed, fun-to-drive vehicles.