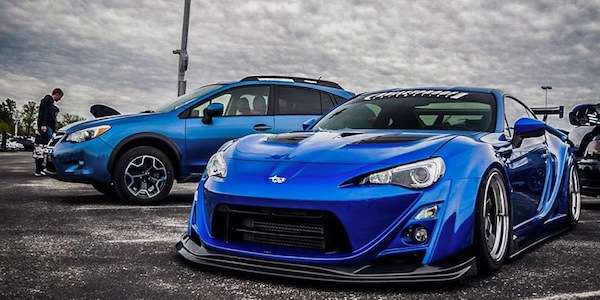 The 2016 Subaru BRZ/Scion FR-S has the same horsepower and performance it did when it first launched. What is Subaru doing with the next-generation BRZ?
Advertisement

John McElroy from Autoline interviewed Subaru COO Tom Doll and asked him what is going to happen with the next-generation Subaru BRZ. The BRZ sports coupe does not fit the Subaru mold of all-wheel-drive multi-purpose utility vehicles, but the Subaru of America boss says there is a place for the rear-drive coupe in the lineup. It will need more performance to survive.

BRZ sales have taken a nose dive in the past year and Subaru knows they need to do something to increase sales. If not, BRZ could get the axe. It’s a tricky situation because Subaru isn’t in the driver’s seat and has to defer to Toyota with any decisions they make with the BRZ/FR-S twins. What will happen in the future with the Subaru BRZ/Scion FR-S/Toyota GT86?

In the recent interview, Tom Doll gives a glimpse of what is coming for the next-generation sports cars. Doll says, “ Many experts in the industry have said BRZ is a fun car because it’s the most fun non-turbo car on the market you can drive. Anyone who has driven BRZ knows this to be true.”

It depends on Toyota

The Subaru boss says BRZ comes with the same DNA that makes the WRX and WRX STI the most fun to drive performance cars on the market. For the next generation BRZ, he says it will depend on what happens with the life cycle of this generation and what the relationship with Toyota will be.

BRZ fans have been asking for a turbo model with more power and performance for the sports coupe. Like the WRX/STI, fans have been doing it with their vehicles with aftermarket upgrades. Doll thinks they are probably right and the sports coupe will likely get some kind of performance upgrades in the future. We do know Subaru Tecnica International (STI) will have more involvement in the future and changes are coming to BRZ.

Even though Subaru’s main focus will continue to be all-wheel-drive utility vehicles, Doll says BRZ has its place in the Subaru lineup. He goes on to say, “I think there is a place in our lineup for the BRZ. We will have to do some things to it to enhance the driving performance a little bit more, take it up a little bit. We have learned that if it had a little bit more performance to it, BRZ could increase in sales even more.”