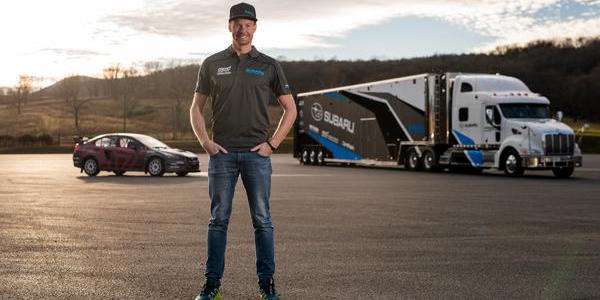 2017 Subaru Motorsports Preview; Patrik Sandell Gets His Hands on the New WRX STI

Subaru will have a new driver and a new-generation Subaru WRX STI Rallycross car for 2017. What other changes are coming?
Advertisement

The big news for Subaru’s 2017 motorsports season, is Patrick Sandell has been added as a driver for the 2017 Subaru WRX STI GRC supercar. He makes the change from driving the Ford Fiesta ST for the Bryan Herta Rallysport team to Subaru Subaru Rally Team USA. Chris Atkinson will also be on board for the full season as the second driver for Red Bull Global Rallycross. Subaru says they will also explore opportunities to enter Higgins or Pastrana in select GRC rounds in 2017.

David Higgins and Travis Pastrana, who will get a full season in the #199 WRX STI rally car, will focus on stage rally in the newly-formed American Rally Association (ARA). ARA will offer a six-event schedule in 2017, with the first race just a month away, February 3-4, Perce-Neige in Quebec, Canada. Pastrana and Higgins will be battling all season for the title.

The 2017 Subaru WRX STI GRC cars get the new body style just revealed by Subaru with a new front facia. Vermont SportsCar, located in Colchester, VT, manages the cars for Subaru and is focusing on a total redevelopment of the next-generation of Rallycross cars during this off season. The development team says they are taking a fresh look at everything, and the car gets a total redesign. It’s getting an updated engine package, and new geometry in the suspension.

New Subaru Rally Team USA driver Patrik Sandell has already had seat time in the WRX STI GRC car. He recently went to the Panthera Training Center in Virginia to help Subaru move the development of the new STI along quickly. Subaru isn’t making any predictions, but they think they can now compete for a driver and manufacturers championship in 2017. They have a steep hill to climb to compete with Tanner Foust and Scott Speed in the Andretti Volkswagen Beetles.