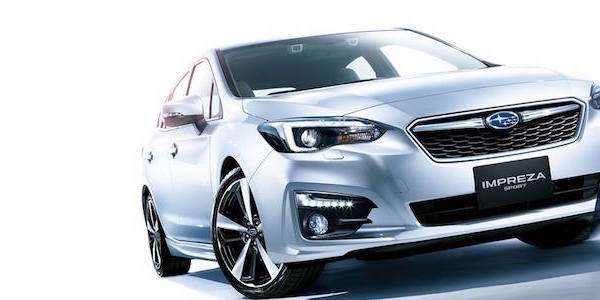 The new-generation 2017 Subaru Impreza is all about safety and it gets 7 new standard features not seen on outgoing models. The Japan-Spec Impreza sedan and 5-Door models launch today and all trims will come with the first pedestrian protection air bag. The new Impreza will also protect occupants inside with seven occupant protection air bags as standard equipment. Subaru says every Impreza in Japan will also get the Advanced Driver Assistance System, EyeSight (ver.3), as standard equipment.

Other new safety features included on the Impreza for the first time, will be steering responsive headlights, High beam assist, Subaru’s rear vehicle detection and a driver’s seat SRS knee airbag. Subaru’s 2017 Impreza is the first model to get the Japanese automaker’s new Subaru Global Platform. This will also improve safety performance by increasing the energy absorption amount at the time of collision keeping passengers safer.

The Subaru Global Platform will underpin every new-generation Subaru produced in the future, and Subaru says it will improve the safety and driving performance of the new sedan and 5-Door hatchback. Subaru calls it Dynamic and Solid architecture. According to Subaru, the new GP will dramatically improve the steering stability and steering response.

The 2017 Impreza also gets new engine technology. Japan-spec base models will get a new 1.6-liter boxer engine. Impreza will also get the new-generation 2.0-liter direct-injection boxer engine. Subaru says 80 percent of the parts in the new 2.0-liter are new and have been revised over the old powerplant.

Also look for an updated Continuously Variable Transmission (CVT) in the new Impreza. Subaru says engineers expanded the ratio coverage (speed range) in the automatic transmission that will improve acceleration performance and fuel economy will be improved at higher speeds. Engineers also reduced the weight of the transmission case by 7.8kg.

The all-new 2017 Subaru Impreza launches today in Japan and it gets 7 new safety features, new drivetrain technology, and a new Global Platform. 2017 Impreza sedans and 5-Door hatchbacks will be coming soon to U.S. showrooms by way of the newly-upgraded plant in Lafayette, Indiana. Stay tuned.