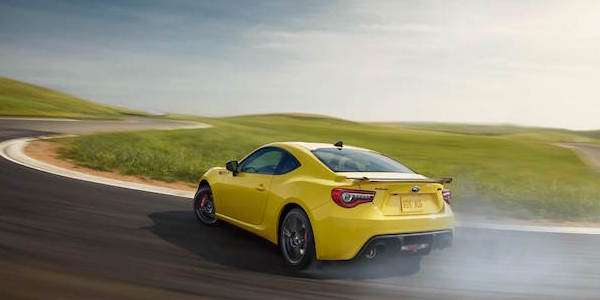 The 2017 Subaru BRZ gets a refresh and a new BRZ Series.Yellow Special Edition is coming too. It gets new exterior styling, changes to the interior, and also suspension and engine upgrades. Are the power upgrades enough for performance enthusiasts?

Subaru engineers tweaked the 2.0-liter boxer engine and squeezed out an additional 5hp and another 5 lb. ft of torque from the naturally aspirated engine. No turbo model for the 2017 BRZ . It does get suspension tweaks with re-tuned shocks and a spring rate change that Subaru says will enhance control of the sports coupe. On the 6-speed manual coupes, performance is improved through a gear ratio change.

The 2016 BRZ rear-drive sport coupe was high on the fun-to-drive meter before, and the changes in power and suspension should ramp it up even more. A 5hp bump doesn’t sound like much, but when it’s combined with more torque and suspension tweaks, it will make a difference in overall driving performance. Is it enough for for performance enthusiasts?

The rear-drive BRZ needed to be updated and it gets enough performance upgrades to keep it interesting for driving enthusiasts. It won’t satisfy performance fans who wanted a turbocharged BRZ for 2017. Subaru and Toyota won’t likely be putting a turbocharged engine in the sports coupe anytime soon.

Check out PAGE 2: The performance package is a step up

The new BRZ Performance Package is available on 2017 Limited models with the 6-speed gearbox. BRZ Series.Yellow Special Edition gets the package as standard equipment. It comes with Brembo calipers and larger rotors on both front and rear brakes for better stopping power. Subaru says the advanced braking system gives BRZ a significant boost in stopping power, fade resistance, and pedal feel. The package also includes SACHS Performance shock absorbers on all four corners for improved ride and corning stability. Also included in the package are special 17-in x 7.5-in black aluminum alloy wheels.

In a recent interview, Subaru COO Tom Doll said, “I think there is a place in our lineup for the BRZ. We will have to do some things to it to enhance the driving performance a little bit more, take it up a little bit. We have learned that if it had a little bit more performance to it, BRZ could increase in sales even more.” Did Subaru do enough to keep enthusiasts interested in the BRZ? The performance package will ramp up the driving dynamics of the 2017 Subaru BRZ. Enthusiasts will have to modify the engine to get more power from the 205hp boxer engine.