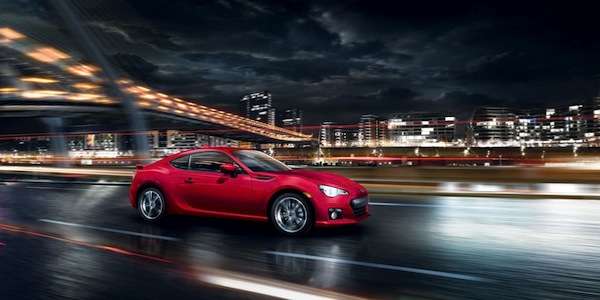 2016 Subaru BRZ gets no change in price, power or features

The 2016 Subaru BRZ sports coupe is released in Canada with no changes in price, specs or features. What is up with BRZ?
Advertisement

Subaru is holding the line with everything on the 2016 BRZ sports coupe. There are virtually no changes in the Canadian spec 2016 BRZ rear-drive coupe. Subaru Canada announced the 2016 BRZ will be available in dealerships across Canada starting in mid-June.

Subaru BRZ sales have been slipping around the globe, but Subaru is making no changes to help spur lagging interest in the two-door sports coupe. The 2016 Subaru BRZ sports coupe is announced for the Canadian market with no changes in price, specs or features. Canada is one of the few markets around the globe where sales are up over 2015. The 2015 BRZ increased 5.4 percent in April.

Sales are up for every other model in Subaru’s lineup. Forester, Impreza, WRX/STI line, Legacy, Outback and XV Crosstrek all are up month-to-date and YTD. All those models have received upgrades recently except for the XV Crosstrek which is due for a model change soon. BRZ has not received any new significant upgrades since it launched in 2012 as a 2013 model. Subaru has brought out some “Special Edition” models, but no major changes have been made to the sports coupe.

There are also no changes to the BRZs 2.0-liter boxer engine for 2016. There is no bump in hp and no turbo engine in the 2016 model. The naturally aspirated 2.0-liter powerplant still comes with the same 200 horsepower and 151 lb ft of torque.

Subaru knew the BRZ would not be a high-volume model. The BRZ is due for a refresh and Subaru Japan is getting ready to launch another BRZ tS that is tuned by Subaru Tecnica International (STI) the performance and motorsport division of Subaru. To create new excitement for the sports coupe around the globe, Subaru will need to upgrade the current model with more...read more.

No new features or options

There are no changes made to the exterior, interior and it doesn’t look like there are any new features and options packages for 2016 BRZ either. Subaru says the 2016 Subaru BRZ has achieved an Insurance Institute for Highway Safety 2015 Top Safety Pick. The 2+2 sports coupe has also earned an ALG (formerly Automotive Lease Guide) 2015 Residual Value Award for highest overall predicted resale value for the third year in a row.

The Subaru Aozora Edition with World Rally Blue Pearl paint has not been announced for 2016 and this is where Subaru could make some changes for 2016. They will likely come out with a special edition 2016 BRZ sometime later in the year.

For now, there is nothing new for the Canadian spec BRZ rear-drive sports coupe. It’s really the most repetitive announced out of Subaru we’ve seen in quite some time. The 2016 Subaru BRZ will be available in dealerships across Canada sometime next week. It’s really the same model as last year.